Will a 'Safe Zone' Be Set Up in Northern Syria? 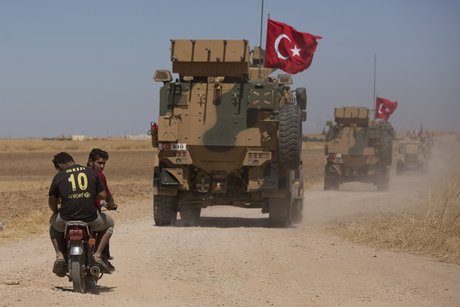 Turkish President Recep Tayyip Erdogan hopes a new "safe zone" in northern Syria will kill two birds with one stone -- easing the refugee burden and pushing Kurdish militants away from his southern border.

The US and Turkey have already launched joint patrols this month with the aim of establishing the "safe zone".

But analysts say the scheme is unrealistic.

In his speech at the UN General Assembly this week, Erdogan unveiled a chart showing ambitious plans for the zone, that would be 30 kilometres deep and run 480 kilometres (300 miles) along the north of Syria.

He said it could eventually allow two to three million Syrian refugees to return to their country.

That has become a priority for Erdogan, who has faced a growing popular backlash over the presence of 3.6 million Syrian refugees in Turkey -- the highest number in the world.

Turkish broadcaster TRT said Friday that the first stage of the plan envisioned one million Syrians being resettled in 140 villages and 10 towns.

The plan would also create a buffer against Syrian Kurdish militants, who control much of the region.

The Syrian Kurdish People's Protection Units (YPG) has been a close ally of the West in the fight against the Islamic State group (IS), but Ankara sees them as a dangerous offshoot of Kurdish "terrorists" in Turkey.

The "safe zone" was first publicly mooted earlier this year by President Donald Trump as a way to stop Turkey attacking the YPG, as Erdogan has repeatedly threatened to do.

Experts are sceptical that the plan will come together, despite joint air and ground patrols by the US and Turkey this month.

The US has struggled to balance its ties with Turkey and the Kurdish YPG militia.

"Even if efforts to create a 'buffer zone' succeed -- and there is no sign that they will -- the underlying source of tension will remain and with it, the potential for a Turkish military response to Ankara's perceived YPG threat," Dareen Khalifa, of the International Crisis Group, told AFP.

She also said the US has made it clear that Washington has "not signed off on any agreement that would entail involuntary relocation of Syrians to the northeast".

Despite the obstacles, however, Washington is desperate to prevent another unilateral attack by Turkey, which has already launched two cross-border operations against Islamic State and the YPG, in 2016 and 2018.

Before his US visit, Erdogan warned that plans were already in place for a unilateral operation if there was not significant progress on the "safe zone" by the end of September.

According to Syria expert Fabrice Balanche, it is not possible to send three million people to the proposed region.

"The liveable area is limited since the majority of the space is semi-desert," he said, and the region east of the Euphrates river is "very under-developed".

It would also mean major demographic change, since the area is mostly Kurdish and 90 percent of Syrian refugees in Turkey are Arab.

Hasan Unal, foreign policy analyst at Istanbul's Maltepe University, said it would be difficult for both sides.

"Are all these people from that part of Syria? If not, they might say: 'We don't want to go to somebody else's land,'" said Unal.

Erdogan has said the zone should extend to the eastern Deir Ezzor region and Raqa, but Balanche said neither area was ready.

Raqa still needs reconstruction after the Kurds led a bitter battle to recapture the city from IS in 2017.

According to Unal, the best way to repatriate Syrians would be in cooperation with the Syrian government following a normalisation of relations between Ankara and Damascus.

"As far as international law is concerned, you can't force them to move."