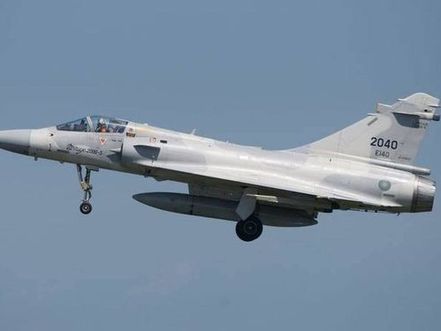 The black box of a Mirage fighter jet that disappeared off Taiwan two years ago has been located and will be sent to France for analysis, the island's airforce announced Thursday.

The single-seat Mirage 2000-5 disappeared from the radar on November 7, 2017 off Taiwan's northeast coast, around half an hour after taking off for a training mission.

Authorities dispatched military planes, naval and coastguard vessels to scour the area but found no sign of the missing jet or its pilot Captain Ho Tzu-yu.

Private contractors later continued the search and managed to locate some landing gear parts and the engine late last year.

The Flight Data Recorder (FDR) was finally located on October 3 in the sea, the air force said.

"We will send the FDR to France to be analysed as soon as possible. The results can help us determine the cause of the incident," air force spokesman Wang Chun-hsiung told AFP.

There were four accidents involving Mirage fighters in Taiwan between 1999 and 2013, killing three pilots. All Mirage jets were temporarily grounded after the 2017 incident.

But the planes remain a core component of the island's ageing air fleet as it faces increasingly aggressive military drills and rhetoric from China.

Beijing claims sovereignty over self-ruling, democratic Taiwan even though the two sides split in 1949 after a civil war.

Earlier this summer the US State Department approved the sale of 66 F-16 jets to Taiwan -- a much more advanced fighter.

The move infuriated Beijing which vowed to sanction US firms linked to the war plane sales.