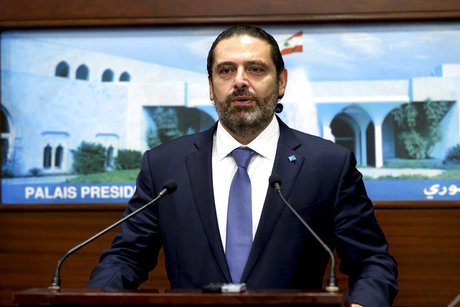 Embattled Prime Minister Saad Hariri on Monday announced sweeping reforms in a bid to appease hundreds of thousands of protesters who have taken over Lebanon’s streets since Thursday in the country’s biggest demos ever.

“I did not ask for the three-day grace period from the people but rather from my partners in the government,” Hariri said in an address to the nation, referring to an ultimatum he had issued for his coalition government partners to endorse a reform paper he presented.

In the Cabinet session held before Hariri’s speech, the government approved Hariri’s reform paper as well as the 2020 state budget.

“The Lebanese youths are demanding their dignity and that their voice be respected… The people are the ones who give politicians deadlines,” Hariri said.

"Your movement is what led to these decisions that you see today," he added.

“These decisions might not fulfill your demands but they fulfill what I've been calling for since two years. I will not allow anyone to threaten the youths on the streets and the state has a duty to protect you,” the premier added.

“I will not ask protesters to stop their demos and if they want early parliamentary elections I will support that,” he went on to say.

Hariri's words appeared to do little to appease protesters in Beirut's Riad al-Solh Square, who chanted "Revolution!" and "The people want the fall of the regime" as they listened to the premier's speech.

"This is all just smoke and mirrors... How do we know these reforms will be implemented," said Chantal, a 40-year-old who joined the protest with her little daughter and a Lebanese flag painted on her cheek.

Noting that the 2020 budget will not contain any taxes, Hariri added that the salaries of ministers and MPs will be slashed by 50%. He added that the country's central bank and the banking sector, which are flush with cash, will help in reducing the deficit by about $3.4 billion in 2020.

The banking sector was criticized by many of the protesters, who blamed it for charging the state high interest rates as it carries much of the $85 billion public debt that stands at 150% of the gross domestic product. Some senior politicians are either owners or major shareholders in private banks and Hariri said taxes will be increased on financial institutions.

“The Ministry of Information and a number of state institutions will be abolished and the principle of merging will be endorsed, but no one's job is threatened in this regard,” Hariri added.

Hariri described the measures as a "financial coup," saying no government in Lebanon's history has taken such steps before.

"Frankly speaking, your protest is what made us to take these decisions that you witnessed today," Hariri said. He added that "what you did has broken all barriers and shook all political parties."

The government will also distribute millions of dollars to families living in poverty and will also give $160 million as housing loans in an attempt to try revive the struggling construction sector.

Hariri said that a law will be drafted to restore money that were usurped as a result of widespread corruption in the country.

Later Monday, President Michel Aoun signed the budget, which will be sent to parliament for discussion and approval.

Earlier, protesters closed major roads around Lebanon and massed in downtown Beirut ahead of the emergency Cabinet meeting.

Demonstrators placed barriers across major intersections in Beirut as well as other cities and towns across the country. Schools, universities, banks and government institutions remain shuttered as the country is gripped by the largest protests since the so-called Cedar Revolution in 2005.

Amid the unrest, troops were deployed on the main road to the palace to clear the way for Hariri and government ministers to reach Baabda.

Many protesters say they don't trust any plan by the current government. They've called on the Cabinet to resign and be replaced by a smaller one made up of technocrats instead of members of political factions.

To many demonstrators, the reforms Hariri announced smacked of a desperate attempt by a corrupt elite to cling to their jobs, and there was little sign Monday that the mobilization was weakening.

The protests are building on long-simmering anger at a ruling class that has divvied up power among themselves and amassed wealth for decades but has done little to fix a crumbling economy and dilapidated infrastructure.

"I am with the reforms. I am against the destruction of Lebanon," said Rabih Zghaib a protester in Beirut. "Lebanon has been badly damaged by the politicians for 30 years. Today their thrones are shaking."

Please, don't slash my monthly allowance we agreed upon; it's not fair.

How does all this happen in 3 days when nothing had been done in 3 years? Everyone one of the ministers and MP's should give back their salary and any other benefits they earned during this time.

And finally, what makes this better than any other law passed. The pudding is in the execution and that has yet to be seen