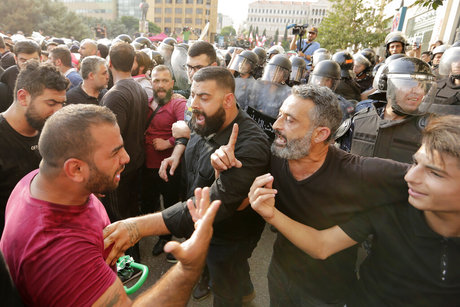 The demonstrators -- who have thronged towns and cities across Lebanon -- have been demanding the removal of the entire political class, accusing many across different parties of systematic corruption.

Nasrallah in a televised speech Friday warned that any cabinet resignation would lead to "chaos and collapse" of the economy.

"We do not support the resignation of the government," he said. Lebanon's national flag, instead of his party's colors, was seen behind him

Hizbullah is a major political player in Lebanon and with its allies holds the majority in the cabinet.

Nasrallah also called on his partisans to leave the streets after scuffles broke out in Beirut between them and other anti-graft protesters.

Unprecedented protests have erupted in some Hizbullah strongholds, but some of its supporters have also taken offense to slogans against their leader.

In the capital's main square, protesters fell silent to listen to Nasrallah's speech broadcast on loudspeakers.

As it neared its end, the police moved in to separate Hizbullah supporters from the rest of the demonstrators, an AFP correspondent said.

Before they retreated, Hizbullah backers threw rocks, plastics bottles and branches at the other demonstrators, who responded in kind chanting "Revolution".

TV networks meanwhile reported a clash between protesters and Hizbullah supporters in the Bekaa town of al-Fakiha.

In Beirut, MTV said shots were fired at retreating Hizbullah supporters in the Qasqas area, injuring three of them. The army has since deployed heavily in the area to preserve security.

The army and special forces deployed along the road outside Hizbullah's stronghold in Beirut, apparently to prevent renewed friction. Members of Hizbullah also deployed on entrance and exits to the southern suburbs, in a clear move to block supporters from heading to central Beirut.

Numbers have declined since Sunday, when hundreds of thousands took over Beirut and other cities in the largest demonstrations in years, but could grow again over the weekend.

Lebanon's largely sectarian political parties have been wrong-footed by the cross-communal nature of the protests.

Drawing in Christians and Muslims, Shiite, Sunni and Druze, the street movement has largely been peaceful -- evolving into celebrations after nightfall.

Waving Lebanese national flags rather than the partisan colors normally paraded at demonstrations, protesters have been demanding the resignation of all of Lebanon's political leaders.

"All of them means all," has been a popular slogan.

After initially welcoming the protests as spontaneous, Nasrallah on Friday insinuated that the protesters were being manipulated.

In attempts to calm the anger, Prime Minister Saad Hariri has pushed through a package of economic reforms, while President Michel Aoun offered Thursday to meet with representatives of the demonstrators to discuss their demands.

But those measures have been given short shrift by demonstrators, many of whom want the government to resign to pave the way for new elections.

"We want to stay on the street to realize our demands and improve the country," one protester, who asked to be identified only by his first name Essam, told AFP.

"We want the regime to fall... The people are hungry and there is no other solution in front of us," said Essam, a 30-year-old health administrator.

On Friday morning, protesters again cut some of Beirut's main highways, including the road to the airport and the coastal road towards second city Tripoli and the north.

On the motorway north of Beirut, demonstrators had erected tents and stalls in the center of the carriageway.

The army in a statement urged demonstrators to refrain from such measures and "respect of freedom of circulation."

On Thursday, scuffles had already broken out in central Beirut, injuring one protester.

Lebanon's Al-Akhbar newspaper, which is close to Hizbullah, early Friday already headlined its front page "Risk of chaos", saying the movement had pledged to work to reopen blocked roads.

Hizbullah is the only movement not to have disarmed after Lebanon's 15-year civil war.

Lebanon endured a devastating civil war that ended in 1990 and many of its current political leaders are former commanders of wartime militias, most of them recruited on sectarian lines.

Persistent deadlock between them has stymied efforts to tackle the deteriorating economy, while the eight-year war in neighboring Syria has compounded the crisis.

More than a quarter of Lebanon's population lives in poverty, according to the World Bank.

Traitors. As if you are not living in the same country. Shame on you. Syrian regime, sectarian corrupt governments and illegal militias caused far more harm than any foreign enemies, including Israel. And all you can do is invoke your constipation with Israel as source of all evils. People are FED UP, with the situation, with illegal militias, with state failures. People do not want any "resistances". They want solutions. And disbanding illegal militias as part of the solution. And who did you stand up with in 2005? Not the people's will. But it happened anyway, so pack now before it's too late.

When the people of Lebanon talk, you shut up and listen.

Mystic - Open your eyes. It wasn't Israel that started these demonstrations, but as usual Israel is your excuse for everything that is going wrong with Lebanon.