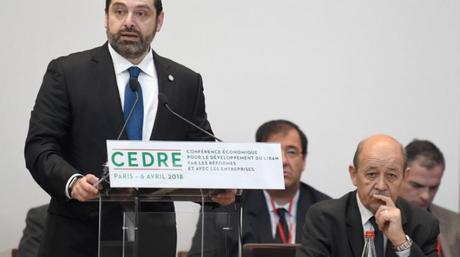 France has reportedly told Prime Minister Saad Hariri that a meeting scheduled in Paris to discuss the details of CEDRE decisions in Lebanon has been postponed, Nidaa al-Watan newspaper reported on Tuesday.

The daily said that French officials have contacted Hariri telling him the November 13 meeting has been postponed.

Well-informed sources said that Paris sees the meeting as “useless” in light of the new political status, mainly that it has not touched serious reforms so far. It expressed a desire to see a new political status including the formation of a new government.

“The cancellation clearly indicates that the international community is starting to put some pressure to change the current status quo in Lebanon in order to avoid the repercussions,” said the sources.

In Paris in 2018, international donors who took part in the CEDRE conference approved an economic rescue plan for Lebanon strictly linked to reforms to improve the economy, including reforms to tackle the electricity sector.

Exactly. I've been saying so. I hope they do not get a single penny. let it collapse. As that's the only way to fundamentally change their corrupt system.