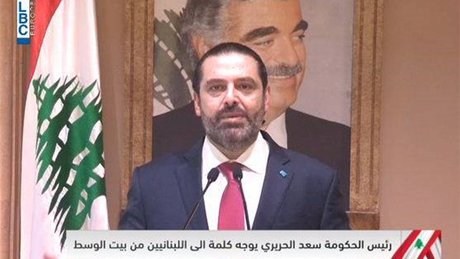 Prime Minister Saad Hariri on Tuesday submitted his government’s resignation to President Michel Aoun, on the 13th day of an unprecedented popular revolt against the entire political class.

“I will head to the Baabda Palace to submit the government’s resignation in response to the demands of a lot of Lebanese who took to the streets,” Hariri said in an address to the nation.

He later arrived at the Baabda Palace and submitted a written resignation to the president.

Addressing “all political life partners,” Hariri said: “Today our responsibility is to seek ways to protect Lebanon and revive the economy.”

“There is a serious chance that should not be wasted and I put my resignation at the disposal of the president and all Lebanese,” he said.

“Posts come and go and what’s important is the country’s dignity and safety,” Hariri went on to say, stressing that “no one is bigger than their country,” which is a famous saying by his father, slain ex-PM Rafik Hariri.

It is unusual for a prime minister to announce his cabinet's resignation before holding talks at the presidential palace in Baabda.

Media reports meanwhile quoted Baabda sources as saying that President Aoun was "still studying Hariri's resignation letter" and that he would not ask him to act in caretaker capacity on Tuesday.

The sudden resignation -- the third by Hariri in his career -- will restart the complicated task of parliament forming a new government if it is accepted by the president.

It would also mark the most significant win by demonstrators who have thronged the streets of the country since October 17 demanding political change.

Sami Nader, director of Levant Institute for Strategic Affairs, said "Hariri is opening the door to a solution because the resignation is the only way for a decent exit from the current crisis."

After the announcement, the main protest square in central Beirut erupted into applause, less than a hour after counter-demonstrators ravaged the site and attacked protesters.

"Saad Hariri is only the beginning," said one protester shown on local television.

"We will continue" until others resign, he added.

The nationwide cross-sectarian protest movement is calling for an overhaul of a political class viewed as incompetent and corrupt.

Lebanon's political leaders have appeared shell-shocked, trying simultaneously to express sympathy for the largely peaceful protests while warning of chaos in case of a power vacuum.

In a bid to appease the protests, Hariri had announced a package of economic reforms aimed at reviving an economy that has been on the brink of collapse for months.

But the protesters have accused the political elite of desperately attempting to save their jobs and have stuck to their demands for deep, systemic change.

I wish but we know that will NOT happen.

Extermination of christianity in Leb is because Christians fly away from Lebanon and don't defend the country against occupation militias such as Hizbullah or Amal...

Well, that was the weak one, let’s see how to get rid of Berri, and Aoun...

Bigjohn - except for you, more and more sensible Lebanese citizens are coming to realise that the real enemy of the Republic of Lebanon is not Israel, but the terrorist organisations like Hizballah and Amal who have based themselves in the country, and the voting system based on religion and not "one person, one vote" as in all democratic countries around the world.