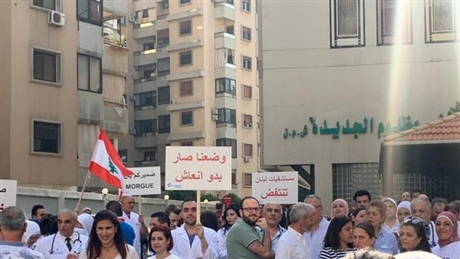 Owners and employees of private hospitals in protest-wragged Lebanon staged a warning strike on Friday over shortage in medical supplies triggered by dollar shortage.

The Syndicate of private hospital owners called for the strike. They stopped all medical and health services except for emergencies, raising the slogan "We are on the last breath."

Association of Private Hospitals, President Suleiman Haroun, told MTV: “ We are sounding the alarm in hospitals because suppliers have stopped delivering medical supplies because of the failure to pay dues.”

Haroun explained: “We can not go on strike like other sectors do, we just sound the alarm. The maximum we do is receive patients, but we won't be able to provide the appropriate treatment for them.”

Haroun had earlier warned in a statement that medical "stocks in the country will not last more than a month,” requesting banks to facilitate money transfers in US dollars for importers of medical supplies.

No one of the political class cares about what you do guys. They have their private doctors and medication stashes and if, for the last 30 years they didn't really give two pence on how the sector is doing, do you truly believe they will do now?

I am sure the politicians will give you the expired medicines they have hidden for this moment and I am sure they will give it to you at the best price possible.