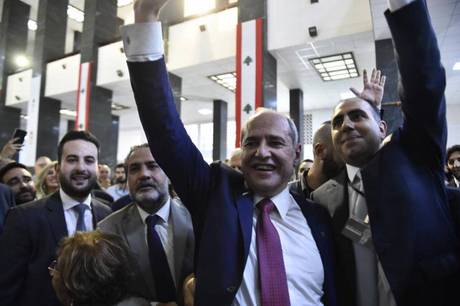 A candidate backed by the protest movement that is sweeping the country was on Sunday elected as head of the Beirut Bar Association, scoring a precious win for the nascent movement over the country’s established political parties.

Lawyers who backed Melhem Khalaf erupted in joy and chanted “revolution, revolution” as the results were announced.

Protest movement supporters also took to social media to celebrate the news as a dear victory that came as they marked one month since the beginning of their uprising.

Khalaf also received votes from the opposition Kataeb Party as the defeated independent candidate, Nader Kaspar, was backed by the political parties of the ruling coalition, including al-Mustaqbal Movement, the Lebanese Forces and the Progressive Socialist Party.

Speaking after he was declared the winner, Khalaf saluted “the enthusiasts of democracy,” hoping democracy will renew all institutions.

“We want the institutions to be an immune fort for the protection of the country and its citizens, in the vein of the Bar Association,” Khalaf said.

“The Bar Association has been the first fortress of freedoms for 100 years and it will always be,” he added.

Khalaf and three other activists had in 1985 founded the prominent Lebanese NGO Offrejoie (Joy of Giving), with a declared mission of "mobilizing around social projects promoting the unity of the Lebanese people."

In 1982, Khalaf and three other volunteers of the Lebanese Red Cross assisted the wounded during the war. Horrified by what they saw, they wanted to act in favor of children suffering from the violence and misery of war, thus founding Offrejoie.

Independent Melhem Khalaf just landed from the moon to take up his new post.

A new beginning away from mafia politics. Each politician blackmailing others for the many skeletons in their closest, making deals at the expense of the people.

A thief thinks everybody steals...