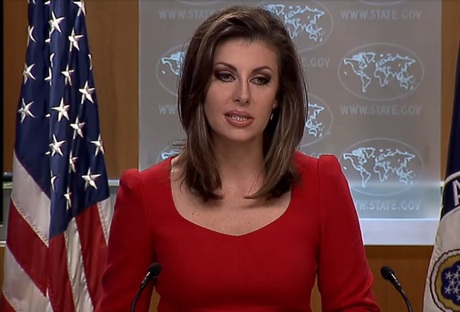 The U.S. State Department on Monday accused the Russian government of seeking to “cast doubt on the authenticity of the Lebanese people’s demand to end endemic corruption.”

“We proudly stand with the Lebanese people,” she added.

"This is simply incorrect," Ortagus said in her statement. She listed U.S. assistance to the Lebanese armed forces and humanitarian aid over the past decade as proof of Washington's support for the Lebanese people and institutions.

A last batch of $105 million of U.S. assistance to the Lebanese Armed Forces has not yet been transferred to the State Department account where it can be used to fund purchases of U.S. equipment.

The delay has prompted questions from Congress, which was notified in September that it would be spent. State Department officials said it is awaiting final approval from the White House before being transferred and that no shipments to the army have been affected.

When authoritarian oriented thinking runs out of excuses to de-legitimatize a purely national uprising, it resorts to two things
1- Put the blame on your opponent (made famous by the late comedian ChooChoo's show "Blame the Italians")
2- Brute force

Both have a short lifetime for those employing them. Hitler, Saddam, Ghaddafi etc.

A Kurdish Iraqi who'd worked for US troops for years under the steal-Iraqi-oil and give it to Kurds program, no-fly zone, etc., told me in Kurdistan in 2004 that the US plan for Iraq was "a weakened state". He called it.
It could be that the various foreign intelligence agencies working in Syria, Lebanon, Iraq, and Iran can't agree on how much instability to create. They don't want collapses, because that could lead to an effective emergency government.
So these states have it on their own to establish broad-based effective governments, like Lebanon by abandoning the set-aside of half of parliament to Christians, and indeed Israel itself: an aristocracy always fails. Iraq has to abandon the US-imposed constitution. Syria is doing about as well as it can, being the heart of Arab political life. Iran, likewise for its cultural tradition.
When will the Persian Gulf monarchies abandon their aristocracies?