Berri Says Formation of Technocrats Govt. 'Not an Option' 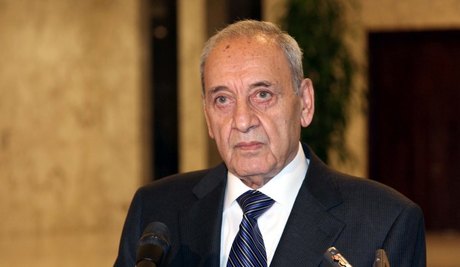 As the country grapples with nationwide protests now demanding the formation of a technocratic government, Speaker Nabih Berri said forming a cabinet of purely technocrat figures was off the table, al-Joumhouria daily reported on Wednesday.

“We have to form a political-technocratic government. A purely technocrat cabinet is out of the question,” Berri said in remarks to the daily.

Asked who would he name for the premiership during the binding parliamentary consultations with the President, he said: “We will make our position clear at the consultations, and of course we have to see the (nominee’s) work plan.”

The name of Samir Khatib, the director general of the Khatib & Alami engineering firm, emerged Tuesday as a strong candidate for the PM post.

He announced that he is willing to form the new government should there be “consensus” on his nomination.

Caretaker Prime Minister Saad Hariri openly declared Tuesday that he is withdrawing his candidacy for the premiership.

The announcement comes nearly a month after he resigned amid ongoing protests as well as a severe economic and financial crisis.

The nationwide anti-government protests erupted on October 17 and have since targeted corruption and mismanagement by the country's ruling elite.

As per devnull, that's fine but please leave.

Why is a technocrat government not an option, Mr. Birri? Government should be run as a company. You don't perform, you get fired. By that measure, Mr. Berri, you'd not have lasted a month based on your performance. Your resignation is accepted!

What a shock--a shia mp that doesn't want a technocratic government. Next he will want the ministry of finance again and assign fpm the energy ministry.

He should leave and take his minions with him.

I have no problem with shia, buddhists, jews, 7th day adventists or pastafarians; however, in this country, the mp's who happen to be shia are very premonidately in the same mindset as Barry and kizb. There are 27 or 28 hia ministers, and ALL of them are M8. All are either kizb, amal or their allies and NONE have supported a technocratic government.

Now if you have an issue with that, so be it, but I do think my generalities are buried in facts.