In Protest-Hit Lebanon, Debate Tents Draw in the Street 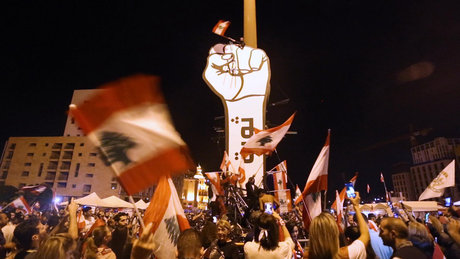 "I'd rather take part in the discussions than applaud or shout out slogans," says the 32-year-old in the city's Al-Nour square.

After years of disillusionment and apathy, a freefalling economy and anti-government protests have spurred Lebanese back into political debate.

Across the Mediterranean country, squares where protesters have denounced mismanagement and corruption have also become centres of spontaneous discussion.

In Tripoli, Ghur walks between debate tents, stopping outside one where dozens of people are discussing a "roadmap for the revolution".

Men and women of all ages sit on the floor, huddle on benches, or stand arms crossed, listening to the latest speaker.

Nearby, protesters revel to the sound of patriotic tunes and techno beats.

"I've discovered laws I knew nothing about," says Ghur, her hair trimmed short and wearing a dress.

"Now I'm more aware of my rights and my duties," she says, in an impoverished city that has emerged at the forefront of the protests.

A young protester takes the microphone to say he thinks the "popular revolution" must evolve towards "political dialogue".

He calls for "early parliamentary elections", as a first step towards an overhaul of the political system.

Every evening from 5 pm to 9 pm, Tripoli residents gather under the tents to rebuild their country one idea at a time.

University professors, activists or even economists are often in attendance.

They talk of secularism and sectarianism, in a country whose legacy from a devastating 1975-91 civil war is a political system that seeks to maintain a fragile balance of power between the myriad of religious communities.

They discuss poverty, in a country where around a third of the population are poor, and the World Bank warns that proportion could soon rise to half.

But they also discuss what they view as the questionable independence of the judiciary, alleged corruption, plummeting public funds, and sometimes urban planning.

In Tripoli, half of all residents already live at or below the poverty line.

Some six weeks into the protest movement, demonstrators in the northern city have continued to gather on a daily basis, even as numbers dwindle in other parts of Lebanon.

The government resigned on October 29, but no concrete measures have been taken to form a new cabinet since.

Philosophy professor Hala Amoun says that, before the protests, most Lebanese had long given up on any political activity.

"They'd lost all trust in the political class," she said in classical Arabic.

But last month a proposed tax on calls via free phone applications such as Whatsapp, pushed them over the edge and onto the streets.

"This revolution is people becoming more aware," said the woman, who appeared in her forties, wrapped in a warm red coat.

"But taking to the streets was not enough. They felt they needed to understand, to know more."

Every evening, she heads down to the square to help dissect the "structural problems" of political power in Lebanon.

"Lebanese are hungry for knowledge," she says.

"It's as if they needed to re-examine their economic, social and political reality, to understand how their political and sectarian leader is controlling their life."

Nadim Shakes, a doctor, is one of the proud initiators of the debate evenings, which he calls "awareness raising conferences".

The aim is to "think about the country's future, what will happen after this revolution," says the 47-year-old, wearing a dark blue jacket over a slightly unbuttoned shirt.

Around the tent, young participants sit together in small groups, chatting in hushed tones or raising their voices when they grow excited or want to make a point.

In one corner, students discuss whether or not they should continue an open-ended strike that will make them lose a year of lectures at university.

Noha Raad, a 49-year-old Arabic language teacher, said she was delighted to be learning something new every evening.

"People need to be made aware," she says, dressed in a flowery shirt and blue cardigan.

But mostly, she said, "they made us understand the meaning of a revolution".

"I've discovered laws I knew nothing about," says Ghur, her hair trimmed short and wearing a dress.
...
They talk of secularism and sectarianism, in a country whose legacy from a devastating 1975-91 civil war is a political system that seeks to maintain a fragile balance of power between the myriad of religious communities.
...
Article 24 of the Constitution which gives half of parliamentary seats to Christians, who are perhaps a quarter of the population, is hardly maintaining a "fragile balance". It seems to acknowledge that Christians will resume a civil war if their historical privileges are challenged. Before the Taef "accord" made it 50:50, Christians got seats in a 6:5 ratio of Muslims, the so-called "national pact"--all unwritten laws, but Article 24 is a written law.

Lebanon can never be secular. It is completely impossible, even if the protests got what they wanted technocrats etc, their inner secterian hatred will still prevail and fight amongst themselves, secterianism is in every Lebanese Blood, be they Christian, Sunni, Shia, Druze.

Everyone thinks about their sect, and whom say they doesn't are a liars.