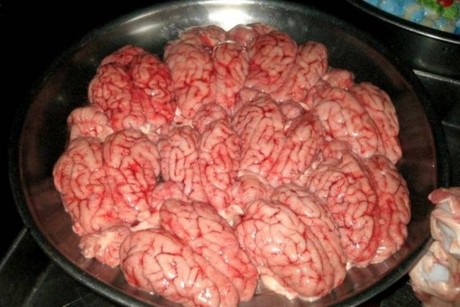 An airport official said it was the fourth time this week that customs officers there had foiled an attempt to smuggle cow brains into the country, reflecting the growth of a moneymaking scheme made possible by some realities of international supply and demand: Cow brains are cheap in Sudan, and Egyptians like to eat them.

A pound of raw cow brains bought in Sudan for less than a dollar can be resold in Egypt for six times as much, airport officials said. That means Friday's haul could have earned the men more than $1,500.

Restaurants specializing in liver and brains are popular in Egypt. Both items are deep fried and often eaten in pita bread with spicy red sauce.

Airport officials discovered the brains Friday while inspecting large freezer boxes brought in by three travelers on a flight from Sudan's capital, Khartoum. After inspecting the boxes, the officials confiscated the brains since they couldn't ensure they had been preserved in a sanitary manner.

The brains would be burned, the officials said, speaking on condition of anonymity under airport rules.