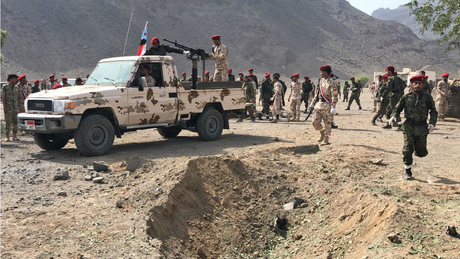 Eleven Yemeni soldiers were killed and more than 20 wounded on Tuesday in a rebel missile attack on a military camp housing government troops, a military source said.

The missile hit the Al-Sadrain Camp in Ad-Dali province while soldiers were gathering in the morning, the source told AFP.

It is the second rebel attack in the province in little more than a week. On December 29, five soldiers of the southern separatist-dominated Security Belt Forces were killed in a similar attack in Ad-Dali.

Despite a lull in fighting in most of Yemen in recent months, Ad-Dali province has remained a flashpoint.

The province straddles the old boundary between north Yemen and the formerly independent south and the rebels are in close proximity to government forces along the front line.

Despite a Saudi-led military intervention launched in March 2015, the Huthi rebels, who are allied with Riyadh for Tehran, remain in control of the capital Sanaa and much of the north.

Tens of thousands of people have been killed and millions more displaced in what the United Nations has described as the world's worst humanitarian crisis.