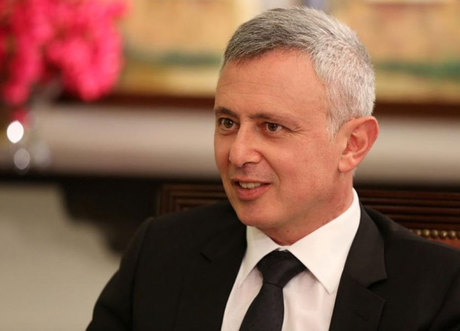 Marada Movement chief Sleiman Franjieh on Tuesday said his participation in the government is not decided yet, and accused Free Patriotic Movement chief of obstructing a much-delayed cabinet formation because of his “greediness” and intentions to get one-third veto power.

“Marada Movement has not decided yet on leaving or joining the government, but I will not impede the formation,” said Franjieh in a press conference.

FPM and caretaker Foreign Minister Jebran “Bassil’s greed is what is obstructing the formation. We refuse to participate in a government where one party can obstruct future government decisions,” he noted.

“When a political group insists on obtaining one third of cabinet seats, it draws suspicions over obstruction schemes in the future,” he explained.

On ministerial portfolios initially demanded by Marada, Franjieh said his movement wanted the “public works and culture portfolios, but that was surprisingly rejected later. Therefore we asked to stay out of the cabinet, but mind you we will give it our confidence vote.”

“We would like to stand by the President (Michel Aoun who is also Bassil’s father-in-law) because he needs allies, but Marada wants to participate in the government with dignity,” added Franjieh.

On the nationwide protests against the political class and economic policies since ongoing October 17, he said: “Lebanese people protested in the streets out of rightful anger and pain at the performance of politicians. Although people accuse the entire political class of corruption but allow me to say that not all are corrupt.

On the popular demand to form a government of technocrats, he said: "I do not support that because it is unrealistic. However, the revolution did achieve genuine goals and has awakened the ruling class and struck its conscience,” he concluded.

Good that he is calling him out---too bad nothing else will happen.

For those who wish, you can also send an email to the Davos Forum: reception@weforum.org

TO WHOM IT MAY CONCERN
(Organizers of WEF 2020)

The care taking Lebanese Minister of Foreign Affairs of a resigned Government is about to take part in your conference.
This person does NOT represent the Lebanese People and is one of the Most corrupted figures of our resigned Government.
He must not be allowed to speak, not in the name of the Lebanese people!
This man is the symbol of corruption, incompetence, arrogance, and feudalism.
He is the son in law of an equally corrupted and incompetent President of the Republic.
This man and his party have been managing the Electricity file of our country for over 10 years, and we are in the dark!

This man was never elected as the head of his party byt placed there by his father in law.
Ths man has no competence.
This man is the owner of tens of pieces of land acquired through his manipulations in the Government.
This man works for himself, not for the People!
This man's name is shouted, screamed out loud by thousands and thousands of protesters in the lebanese streets since October 17th (please type his name in Youtube).
This man cannot represent us Lebanese. He is illegitimate to speak on our behalf.
Thank you.