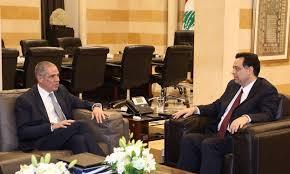 EU Ambassador to Lebanon Ralph Tarraf held talks Thursday with Prime Minister Hassan Diab at the Grand Serail and noted that the European Union’s assistance to Lebanon hinges on the implementation of economic reforms.

The meeting was held in the presence of Environment and Administrative Development Minister Demianos Qattar.

Speaking to reporters after the talks, Tarraf said the conferees agreed that the new government needs to focus on the economic files and implement structural reforms in order to improve the government’s performance.

He added that the EU is willing to help Lebanon should the government carry out the necessary reforms.

Tarraf also stressed that Lebanon should dissociate itself from the regional conflicts, adding that the European Union will monitor the government’s political alignment.

He also declined to answer a question on whether the government is one-sided or under Hizbullah’s control.

Diab also met on Thursday with French Ambassador to Lebanon Bruno Foucher in the presence of Minister Qattar.

It seems he is more Syrian than Syrians! He announced the death of Syria's foreign minister before the Syrian authorities did:)

Tarraf, from Germany, specifically cited as needful of reform Article Twenty-Four of the Lebanese constitution, which assigns half of the seats in its legislature, the Chamber of Deputies, to Christians, who make up about a quarter of the Lebanese population. He said, "This may have made sense when France was trying to cling to its former Syrian domains, but now this is just a mandate for instability and insecurity."