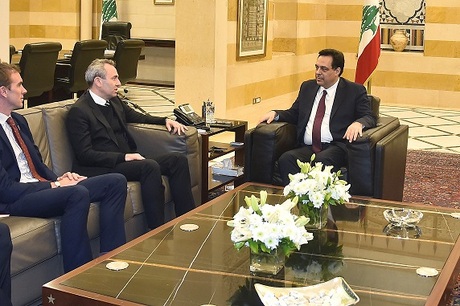 After the meeting, Rampling said: “The formation of a new government is an important step for Lebanon. The UK has been consistent in calling for the urgent formation of an effective and credible government, which reflects the aspirations of the Lebanese people.”

He added that along with “other members of the international community,” Britain stands ready to “support Lebanon.”

He, however, noted that the government must first “demonstrate its commitment to the reforms which Lebanon desperately needs.”

The meeting was also attended by Lebanon’s new environment and administrative development minister Demianos Qattar, who had served as finance and economy minister in the past and was once nominated for the Lebanese presidency.

Rampling specifically cited, as needful of reform, Article Twenty-Four of the Lebanese constitution which assigns half of the seats to its legislature, the Chamber of Deputies, to Christians, who make up about a quarter of the population. He said, "This may have made sense when France was trying to cling to its former Syrian domains, but now this is just a mandate for instability and insecurity."