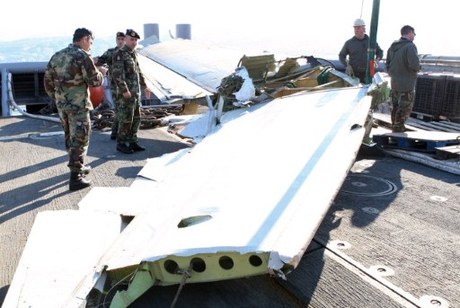 Public Works Minister Ghazi Aridi revealed on Tuesday that the probe in the 2010 crash of the Ethiopian plane off the Lebanese coast, in which all 90 people on board died, points to a pilot error.

“The truth is in the Lebanese report, the pilot is completely responsible for the plane crash,” the minister said during a press conference held at Beirut’s Rafik Hariri International airport.

Aridi pointed out that the direct reasons behind the incident fall on the pilot and the co-pilot who were on 51 days of service without a break.

An earlier preliminary report by the Ethiopian authorities on the crash said the accident was due to pilot inexperience and a series of errors by the pilots who failed to take into account signals emitted by the plane's instruments.

The pilot erroneously believed the jet was on automatic pilot and as a result he and his co-pilot failed to heed the alarm signals as the plane veered dangerously off course before crashing, the preliminary report showed.

Aridi ruled out reports saying sabotage was behind the crash.

The Ethiopian Airlines Boeing 737-800 went down minutes after taking off from Beirut international airport, killing 83 passengers and seven crew members.

Lebanese officials have previously said that data recovered from the plane's black box showed all instruments were working well until it plunged into the Mediterranean during a fierce storm.

Ethiopian Airlines rejected the official Lebanese probe in the 2010 crash of its jet, saying it was likely caused by sabotage, a lightning strike or was shot down.

"The aircraft disintegrated in the air due to explosion, which could have been caused by a shoot-down, sabotage or lightning strike," Desta Zeru, vice president of flight operations for Ethiopian Airlines, said in a statement.

However, the airline's own accident report released Tuesday said witnesses saw an explosion in the sky before the jet crashed into the sea, indicative of "external damage" inflicted, Desta told reporters.

The airline had already rejected an earlier draft report from Lebanon, and instead maintained the pilots were alert at the time of the crash, according to black box evidence.

"It's biased, it's missing facts, (it includes) hypotheses and conveniently excludes hard facts. We totally reject it," Desta said.

Desta accused Lebanese authorities of omitting the majority of the wreckage from the investigation and said Lebanon "ignored crucial information," such as security footage and autopsy records.

In the first place, there was no probe or investigation to speak of. Minister Ardi told us it was a pilot error on day 1 and have been trying to justify their claim since that day. There is ample evidence that the plane was hit by missile to kill key Hamas operatives who boarded or were expected to board the flight. The joke of pilot error is a cover for Lebaneses authorities to defuse internal tension at the expense of the innocent passengers who lost their lives and Ethiopian Airlines. Go to wikileaks and you will find that pilot error was decided to be the way out on day 1. Nothing new at all in their final report.

Mowaten and co. U guys are non educated that's for sure, I have been reading ur comments and they lack evidence. Were is the evidence that the plane was shot down? Were is your proof? Also u think that just to get to a low ranking hizb official they need to take down a whole plane. U must be delusional. They can kill that operative whenever they please and they don't need to shoot down a plane for that low ranking hizb member. In Iran they are assassinating scientist without even killing anyone else and also without being caught and Iran's security is far more advanced than hours. Of they really wanted that hizb man dead they would have done so anytime they wanted.

Israel blew it up because there was a very important Hezballah asset onboard the flight. <EOM>

The Lebanese pro-Hezbollah government is obviously covering up for Hezbollah's incompetence. Everyone remembers that it was during that time that it was reported by the pro-Hezb medias that Hezbollah got new surface to air missiles. The Ethiopian plane was blown up by mistake while the illiterate idiots were testing their new toy. Why else would Hezbollah stay silent on the alleged murder one of their top operatives? How else can they accept the pilot error story with so many Shiite victims killed by an alleged Mossad operation.

hezzballah shot it down and now the minister is covering the shit turban of hassouni, what else can you expect from this shit government

There was an eye witness that said he saw fire fall down the sky into the sea and another witness said he heard a large explosion.

Israel knows that the downing of African plane would not be investigated if they can make it look like a pilot error. In Iran, others have been killed...the driver was killed with the scientist, and civilians were killed when Mossad posed as CIA to help Jundallah plan attacks. I an not sure if Israel is involved, but the fact that there will not be a major investigation does not make me doubt it.

The Lebanese pro-Hezbollah government is obviously covering up for Hezbollah's incompetence. Everyone remembers that it was during that time that it was reported by the pro-Hezb medias that Hezbollah got new surface to air missiles. The Ethiopian plane was blown up by mistake while the illiterate idiots were testing their new toy. Why else would Hezbollah stay silent on the alleged murder one of their top operatives? How else can they accept the pilot error story with so many Shiite victims killed by an alleged Mossad operation.

Jean....are you saying it's the pilot's error then?