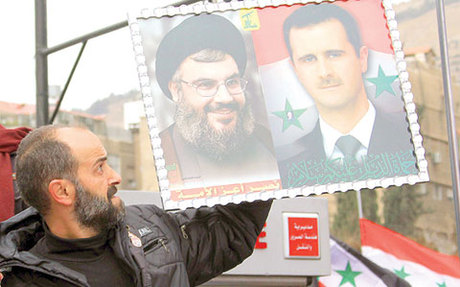 Israel has serious concerns about what will happen to "huge stockpiles" of chemical and biological weapons in Syria when the Assad regime collapses, a senior military official said on Tuesday.

"The immediate concern is the huge stockpiles of chemicals, biological (weapons), strategic capabilities that are still going into Syria, mainly from eastern Europe," Eshel said.

"We are talking about huge stockpiles," he said.

The regime has spearheaded a bloody crackdown on pro-democracy activists seeking to overthrow Assad, who has vowed to remain in power, raising the spectra of civil war between Syria's many religious sects if he steps down.

Eshel said the threat of civil war was a real possibility if Assad clung to power.

"If Assad will adopt this Yemenite model and leave, it might prevent a civil war," he said, referring to an agreement that saw Yemen's former president Ali Abdullah Saleh agree in November to leave power.

"But if he won't leave of his own will, we might get into civil war," he said. "If there will be a civil war, it might be a disaster."

"I think the major challenge the Syrians will face in a few months, is bankruptcy. The reserves will be zero, and this is going to create, I think, internal turmoil. We can expect refugees in many countries."

On January 10, Israel's Chief of Staff Lieutenant General Benny Gantz told MPs that the military was preparing for the possibility of an influx of Syrian refugees, particularly on the occupied Golan Heights.

the photo above depicts the 2 partners in crime: the 2 most despised people in the world right now.

Excellent, let them fear! Indeed, let the March 14 losers and Lebanese expats who have an inferiority complex and strive to be 'Western' fear as well! ONE WAY TICKET!

@partners...You must be quite delusional to think such a moronic thing. Indeed, the only two things despised in this world are filthy Zionists and fat, ignorant Americans.

To those waiting for Israel's collapse.
Well, we will not be alone as you know.
As Lebanon will not remain intact.
Therefore for the safety of our region, do whatever you can not to commit suicide.
As we say that in the next war after this one we'll all fight with stones and sticks.

@slash...Oh yes, a filthy Zionist, such as yourself, is undoubtedly filled with joy at the thought of Israel destroying her many haters. Indeed, you must have been quite exalted and ecstatic during 2006, savoring the moments as you watched the corpses of those murdered by your superiors being removed from the rubble.

slash logic = its civilized to hate your own people but hateful to hate those who have bombed our children to pieces. Look how nice he is when replying to zionists and compare how rude when he replies to lebanese. Its disgusting.

As much as you try to impress "the white man" the more pathetic you will be. You will always be their "token arab", their shoe shiner and puppet, nobody respects you at the end, neither your people nor the white man.

Danny B israel will collapse as soon as those protecting its borders collapse... one has already collapsed and that is hosny mubarak and the two others will collapse soon and those are bashar al asad and hizbull shit... and maybe later the king of jordan and the irani regime might also collapse... do you really think that a terrorist country like israel would have survived since 1948 if it wasn't protected by its neighbors who, by the way, took over the countries they rule by power or through assassinations and not through elections

The Biological and Chemical weapons will belong to the new government if there is a new government in Syria. M14, M8, and Independent leftist like myself all agree that Israel years are numbered and it is Lebanon's ONLY enemy. ALL Lebanese consider Israel and NOT HA as the main problem and enemy. You Zionists are wasting your time writing on this website. And to the few Lebanese collaborators who are living in the past...you need to listen to your existing leaders in M14 like Gemael and Geaga because you are totally isolated (even though you most likely do not live in Lebanon).

Well well well Danny. I guess the Palestinains will be the only winners then right? since they become equal with everyone else.

Look what you have done to them; If the world is about to end tomorrow they will be the only relieved people. They become your equal.

Dear SomeOne Else: If Israel collapse Lebanon to follow.
Calling Israel terrorist state, wonder what are Arab states?
How many embassies restaurants buses schools or shopping centers did Israel blow up? Do you really need Israel to kill Arabs and Palestinians? you do it with greater success. Hate Israel is the excuse for blaming it for the poverty, corruption non democracy and unemployment in Arabian countries.
It might be a surprise to you but King Huessein killed in one month more Palestinians than Israel did in 65 years of independence.
And Israel was so bad to the Palestinians in Gaza strip, ask their opinion now, living under the Hamas control.
Ask the Israeli Arabs, under whom they prefer to live? you will find that 78 percent choose to live under Israeli's control.
In Lebanon there are many Palestinian. How many of them can live where they want, elect to the Parliament, getting social benefits etc?

@ Slash and Mowaten, Iran , US , Israel and Syria are all to blame for the unrest in Lebanon. Stop each blaming your ennemies because in reality as well all know they are friends, as i explained to you mowaten on the post over the letter from the US to Iran, it was a letter of love and friendship and to keep acting in front of arabs as ennemies so they can sell more weapons to KSA and others. in return , they will not send to Israel the proper equipment to attack Iran.

As for Syria, we all know that the Assad regime has been protecting Israel undirectly for more than 20 years. And as for Israel, we all know that they love Bachar , he is the lesser evil between him and the Muslim brotherhood. they wouldnt want to change their lover for anything.

And finally, as for the damages to lebanon, both Israel and Syria are responsible. Israel for taking palestinians land which caused them to come to Leb and start problems in moukhayamet, and Syria for entering Leb and for 30 years causing nothing but chaos, corruption, and assassinations.

Conclusion : thank you US and Israel, thank you Syria and Iran, you have created a gap between lebanese brothers, what you always wanted. you have succeeded, they now fight each other on daily basis, and your foreign ministers are dining together laughing at us inferior creatures that cannot understand that they are beeing fooled all the way. We deserve everything we got.

Hez should just go ahead and invade israel and finish the job. They can do it,i just dont know why they dont.

Our problems are stemmong from the fact that instead of trying to improve our economy, infrastucture, social life, create jobs, improve healthcare etc., all we excell is commenting on our neighbours. We want to fight A and B and avoid C and kill D.... This is all bull...and this will lead us nowhere as in the meantime, pour enemy, ISRAEL, despite all what you can say, is prospering, is developping new technologies, and giving to ALL its citizens equal rights, yes, it is true. In fact the minorities in Israel are better off than any other minority in any Arab country... So let us keep the narrative under hush hush...

Danny B.. your reply, if you haven't noticed, is a confirmation of what i said earlier that the regimes in syria, jordan, eygpt during mubarak, iran and its tail in lebanon(hizbulla) are nothing but safeguards on the borders of israel. protecting it as well as doing the dirty job that israel can't do by killing palestinians and making the arabs that are living under these corrupted undemocratic regimes poor, unemployed, and therefor uneducated. and they do all this under the name of "resistance
No it doesn't surprise me that king hussain killed many palestinians, and i know that hafez al asad has killed even more palestinians than both king hussain and israel. thats exactly what i was talking about earlier and thanks for confirming it
Do you think that israeli soldiers prevent arab fighters from crossing the borders to israel??think again.. its hizbulla, the syrian army, the jordanian army and the egyptian army that prevent the fighters from reaching israel. your loyal safeguards

as for How many embassies restaurants buses schools or shopping centers did Israel blow up? it will take me years to count them.. unless you think that blowing them up with tanks or missiles or bulldozers is not considered a terrorist act
And no when israel collapses Lebanon will not follow.. Lebanon and all the countries surrounding israel have already collapsed decades ago and we are still under the rubble.. its when we rise that israel will collapse, and that will be after those regimes in the surrounding countries collapse and hopefully soon