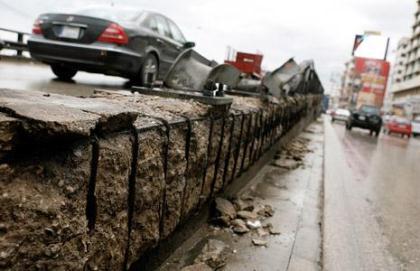 The decision has been taken to remove the Jal el-Dib bridge “as soon as possible” in order to avoid a possible “disaster,” Interior Minister Marwan Charbel said Tuesday, after the collapse of a building in Ashrafiyeh that left 27 people dead stirred fears of the possibility of similar disasters.

Numerous complaints have been made about the weary metal bridge on the Jal el-Dib highway, north of Beirut. But Charbel reassured that “there is no need to panic,” saying the relevant authorities had taken the “necessary precautions.”

“We have conducted the necessary contacts with the Council for Development and Reconstruction and Aridi, who had asked us to prevent the passage of trucks, alleviate the pressure on the bridge and prevent any overload,” Charbel said.

Earlier on Tuesday, Aridi stressed to Voice of Lebanon radio station that the bridge “should be removed.”

“I have sent experts to inspect the bridge and referred a report to the Council for Development and Reconstruction which is entitled to deal with the issue,” he told VDL (93.3).

Aridi neither confirmed nor denied the reports about “cracks in the foundations of the bridge” but said he will follow up the issue with Charbel.

The municipality hasn’t asked drivers to avoid using the bridge, he stressed.

make a correct tunnel there (try to avoid letting it flood in the first rain). better yet, make a fast metro that will carry people from Tripoli to Said passing thru Beirut etc...Even better make a suspended high and pretty bridge over the mediterranean from Ras Beirut to Jounieh. All of these solutions should be implemented. I can recommend companies who can implement them on a B-O-O-T basis with 0 cost to the government. Please do something!

how complicated could building a [tiny] bridge can get?
how much time should it really take...

It's funny how people get so emotionally charged after an incident that is due to sheer neglect from the victims themselves. I'm not being apathetic, but they had clear warnings weeks before the collapse. The foundations cracked a month ago and they were all aware. I'm not saying the government is not to blame but people should take responsibility for their own actions sometimes. The bridge will NOT collapse, it's a stupid chain letter started by some idiot with so much time on his hands. All experts who inspected the bridge said that the bridge MUST be removed but it will not collapse anytime soon. It will crumble and fall apart slowly giving enough time for people to react. Until now it's still safe. Stop spreading lies and rumors

the lebanese politicians are lucky to have such sheep called lebanese citizens who never say a thing to them... on the opposite they adore them, let them do whatever they want, let them steal, build empires, but never say a word...
the country is collapsing, basic needs still not met in the 21first century, but people still accept everything! they just fight , call the other camp traitors but none feels lebanese only shia sunni druze or christian...

the lebanese politicians are lucky to have such sheep called lebanese citizens who never say a thing to them... on the opposite they adore them, let them do whatever they want, let them steal, build empires, but never say a word...
the country is collapsing, basic needs still not met in the 21first century, but people still accept everything! they just fight , call the other camp traitors but none feels lebanese only shia sunni druze or christian...

At last some reasonable comments.
@francois. I agree. Typical behaviour, not only in Lebanese gvt, but everywhere. People focusing on unimportant issues. Building collapses. Overreaction. Bridge dismantled. People felt they did something. People continue focusing on unimportant issues.
@marc. Agree 100%. Instead of gloating of passing a bill for making an electrical power plant, or passing a law for oil exploration, (these things should be taken for granted) We need a scenic 10 lane bridge from saifi to Tabarja- with bike lanes - the result of an architectural competition- a new landmark for Beirut. With a couple of artificial island at a couple of pillar. The proceeds of restaurants of the artificial islands + the tolls will pay the bridge cost.

What a disgrace. They put us on $55Billion of debt to rebuild Down Town aka Solidere and left the shar2iye to ruins. Yalla hayk badou sha3ebna. mnestehal!

@ CJ, 55 billion is not for Solidere only , dont listen to FPM propaganda, as the syrians and many lebanese corrupt stole during this period, at least you have a new downtown and a new airport that is a lot better than many developped countries's airports. I am a christian and i can tell you the only ones i blame for the char2iye of beeing this crappy is our MPS, be it from Tayyar, Lebanese forces or others. As well as for the lebanese living there, when you go to Jounieh and keserwan, it looks more like hollywood style living people, instead of doing something good or inviting municipalities to rebuild, they only think about smoking cigars at Lina's or showing off at Saniour's.

We should stop blaming people of the past, and look at our people that still voted for all those crooks, i was looking at a reportage, so many regions are living below the average and are trumendously poor. Be it chiite, christian or sunnite regions. Where are the people responsible? not only the governement but MPS? from this generation or the old one? what have they done? of course the trend in Lebanon is to vote only because of past experience , hating some and loving some because of history, which is always falsified in Lebanon anyway, instead of looking really of what they are today or if they changed. No one has principles or convictions anymore. Everybody is in search of money and position only

Although i disagree a lot with Hezbollah and i am not very fond of Mustaqbal, look what they have done to their people. hospitals, schools, helped them get out of misery, providing them of basic needs. What have our christians leaders done for us? the casino bridge during 2006 that was destroyed needed more than a year to be rebuilt, on the other end look at hezbollah rebuilding most of the south's bridge in a blink of an eye. they are at least more organised and though their ideology is not mine and never will be, i admire their organisation and their help to their people. Something we never will have. So @ CJ, lets blame ourselves a bit instead of others, because only people that are narrow minded would believe we have nothing to do with it.