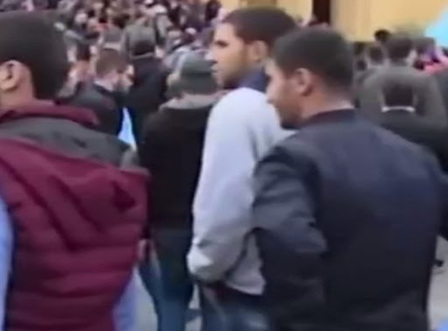 The Mustaqbal supporters were flocking to the Square to visit the tomb of slain ex-PM Rafik Hariri on the 15th anniversary of his assassination.

The two sides charged against each other and hurled water bottles and sticks.

Mustaqbal bloc MP Sami Fatfat was present on the scene during the first clash and sought to pacify the situation.

“Friction is expected due to the presence of two groups on the street and my presence was not the reason behind the clash,” Fatfat told MTV.

The clashes renewed later in the day prompting the intervention of security forces.

Mustaqbal supporters also attacked a reporter and a cameraman of al-Jadeed TV who were present on the scene.

The Mustaqbal supporters accused protesters of hurling insults at them as the protesters said the other side had provoked them first.

A similar clash had erupted overnight in the area.

mustakbal party has nothing to envy the other thug parties...same thing , different thugs that's all.

the goals of every lebanese party is to crush the revolution of the people, scare them from the streets because every single politician has everything to lose if the people have a say!
shame on them

it seems that all those party thugs fighting against protesters all have a bright future in lebanon, all of them must have a good job, electricity 24/24, running water in their houses, clean air to breathe in their neighborhood, plenty of green spaces for their kids because for sure their leader provided all that to them already...

that is why they want to silence the protesters who are just spreading lies about the situation in lebanon!