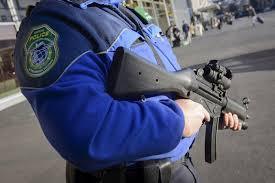 A Bulgarian court handed a Swiss man a five-year jail term for terrorism and arms smuggling after he was caught, heavily armed, on his way to Syria in 2018.

The man was detained at Bulgaria's main southeastern border checkpoint with Turkey after his father alerted the Swiss authorities that his son had left Switzerland in a car packed with arms.

Bulgarian border guards found two automatic rifles, a smoothbore hunting rifle, a SIG Sauer pistol and ammunition in the car as well as 24 knives and a map tracing the route to the Syrian city of Idlib.

The man told Bulgaria's specialized court that he did not remember how he left Switzerland and found himself in detention in Bulgaria.

But the court found him fit for trial and guilty on two counts -- for terrorism and for arms smuggling.

He was jailed for five years but the sentence can still be appealed.

Bulgaria has been a major crossing point on the route for Europeans heading to join the jihadist Islamic State organisation in Syria and Iraq but border arrests have dwindled since peaking in 2015.

Three Syrians residing in Germany were already jailed for six years each in Bulgaria in 2017 for trying to join fighting in Syria.

Between 2015 and 2017, Bulgaria extradited three French, three Dutch and five German nationals over "terrorist activities" to their home countries.

In 2016, it also returned back to France a brother-in-law of one of the men who attacked French magazine Charlie Hebdo after he was caught on his way to join IS forces fighting in Syria.