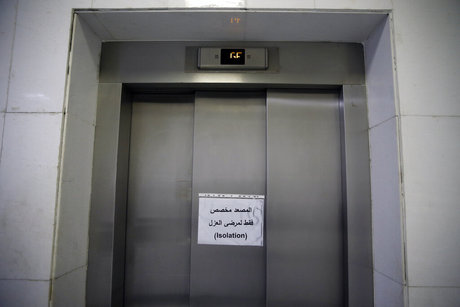 The Rafik Hariri University Hospital announced Tuesday that 32 people underwent examinations for the novel coronavirus over the past 24 hours and that seven of them were quarantined at the hospital while the others were asked to isolate themselves at their homes.

“Lab tests were conducted for 18 cases and they tested negative,” the hospital added in its daily statement.

Three people meanwhile were discharged from the hospital’s quarantine ward and will isolate themselves at their homes for 14 days, the statement said.

“They were provided with all the instructions and required prevention means according to the directions of the World Health Organization, after they underwent the novel coronavirus test twice at the labs of the Rafik Hariri University Hospital,” the statement added, noting that the three individuals tested negative twice.

The number of people quarantined at the hospital meanwhile rose to eight and they all have tested negative, the statement said.

The 45-year-old woman who tested positive on Friday meanwhile remains quarantined at the hospital and is “in a stable condition,” the hospital added in its statement.

The Lebanese woman had traveled from Qom in Iran where she was on a pilgrimage trip to Shiite holy sites.

Health Minister Hamad Hasan has said that all the people who were on the same flight from Iran had been contacted by the health authorities.

Two other Iranian planes and an Italian plane landed in Beirut on Monday.

Iran has reported 15 deaths from the epidemic, more than in any country other than China. Nearly 100 others have meanwhile been infected in the country.

This is ridiculous. At least half a dozen planes arrived from Iran and Italy in just the last two days, more than just 32 people should be tested.