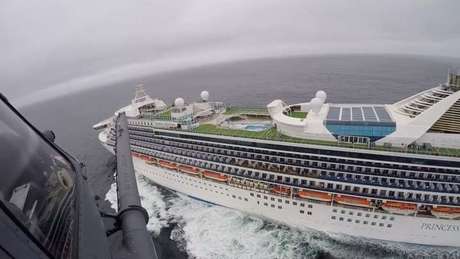 An Ecuadoran navy ship with 50 people on board was quarantined after it was discovered that one of the crew had had contact with the first person in the country known to be infected with the new coronavirus, authorities said Thursday.

Despite the sailors' negative test results for COVID-19, the disease which first appeared in China late last year, the ship was placed in isolation until Friday, the health minister said.

"It was decided to undertake a quarantine of the unit, a warship, the BAE Chimborazo," the navy's health director Douglas Campos said during a press conference in the southwestern city of Guayaquil.

The health ministry and the navy made the decision after a crew member "had contact with relatives of positive cases of coronavirus" in Ecuador -- which has had 13 infections -- epidemiology official Inocencio Bajana said.

"The warship crew member knows one of the cases that gave a positive (result) for that condition," and "had contact," the health ministry said.

Authorities were referring to a case of a 71-year-old Ecuadoran woman who lives in Spain near Madrid and who arrived in Guayaquil on February 14 after first stopping at an airport just outside the capital Quito.

The rest of Ecuador's positive cases originated from that first one, including three new infections reported earlier Thursday, raising the country's total to 13.

The ship has been anchored at the Southern Naval Base of Guayaquil since Monday, Campos said, with those on board receiving ongoing checkups.

"No crew member is presenting symptoms," he said.

Meanwhile, the country's original patient, who arrived with no symptoms, was in intensive care in a hospital in Guayaquil.

The 12 other patients have only mild symptoms and are in isolation at home in Guayaquil and nearby Babahoyo.

Health authorities are tracking 100 other people who had contact with the first case and who were also isolated at home, the ministry said.

More than 97,000 people have been infected with the coronavirus worldwide, with some 3,300 deaths in 85 countries and territories.