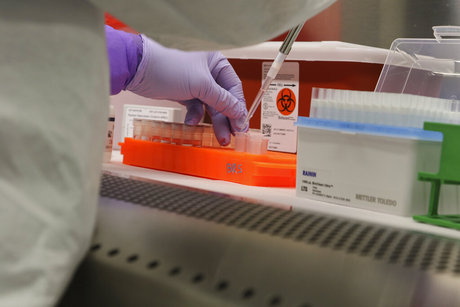 The director of the state-run Rafik Hariri University Hospital said the 11 cases were confirmed after lab tests for 202 suspected cases over the past 24 hours.

Speaking at a press conference, the director said a virus patient who died Tuesday – Lebanon’s first fatality – had arrived at the hospital in a critical condition.

“We offered him the internationally endorsed treatments but he suffered complications such as hypotension and high fever which resulted in the stoppage of his heart and his death,” the director added.

He also announced that other hospitals should start exerting greater efforts in the battle against the COVID-19 coronavirus.

The patient who died, a 56-year-old Lebanon man coming from Egypt, had been initially admitted into the Notre Dame des Secours hospital in Jbeil and Health Minister Hamad Hasan said he was not transferred in a proper way to the Rafik Hariri hospital. TV networks said he had diabetes and that his condition worsened after taking antibiotics and after his diagnosis with the coronavirus was delayed for several days.

The Notre Dame des Secours hospital said the Rafik Hariri hospital had initially refused to conduct a coronavirus test for the man seeing as he had arrived from Egypt -- a country not listed as a virus hotbed at the time.

The man has reportedly infected several nurses and patients at the Notre Dame des Secours hospital.

and the flights still come in from Iran...