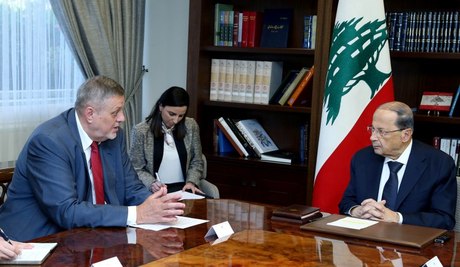 NNA said the two men’s meeting came ahead of the report that Kubis would submit to the UN Secretary-General in the coming days on Lebanon’s action to address its economic crisis.

“The government is working at a rapid pace to implement the reform plan that deals with debt restructuring, banks, financial and administrative reform, in addition to the social and economic plan,” NNA quoted Aoun as telling Kubis.

The UN envoy to Lebanon had earlier reiterated that the government must take its own steps to mitigate the economic crisis before any outside help.

On coronavirus, Aoun said during the meeting held in the presence of ex-minister Salim Jreissati: “The government is taking all appropriate measures to combat coronavirus and limit its spread through preventive measures taken on more than one level.”