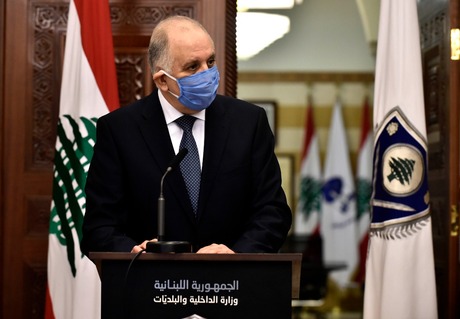 “The law will be implemented on everyone. Every violation threatening public safety will be suppressed and I won’t receive phone calls from anyone,” Fahmi said at a press conference.

“There is full coordination among the state’s agencies, especially security agencies, to apply the taken measures,” the minister added, calling on grocery shops, pharmacies and institutions still allowed to operate to “organize the entry of citizens to prevent crowding.”

Army troops and security forces intensified their patrols on Sunday to ensure non-essential shops and institutions are shuttered and people are not gathering in groups or moving around for non-urgent matters.

In a televised address on Saturday, Prime Minister Hassan Diab warned of a spike to epidemic levels if people continued to flout social distancing rules, saying the government was calling in the army and security forces.

His government decided to "task the army, Internal Security Forces, General Security and State Security to... implement the order for citizens not to leave their homes, except out of extreme necessity, and prevent gatherings contravening" the order, Diab said.

This would take the form of patrols and checkpoints, and those found disobeying would be pursued.

Last Sunday, the government ordered all people to stay at home and all non-essential businesses to close.

The airport has been shut since Wednesday.