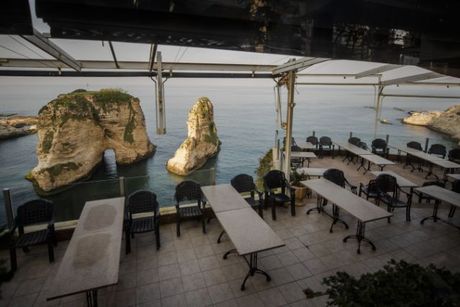 As the pandemic continues to spread, governments across the Middle East are clamping down on the region's cherished traditions: No more massive weddings and celebrations. No more evenings spent mostly by men in traditional coffee shops across the region. And most importantly, no more smoking of the beloved shisha, or water pipe, in public places.

The Lebanese port city of Sidon, south of the capital Beirut, is mostly deserted. It once bustled with people flocking to its traditional coffee shops where elderly men gathered to smoke cigarettes and play cards and backgammon. Those closed after the Lebanese government ordered a lockdown last week.

Qassem Bdeir, a fisherman, sat with a group of friends near a hidden segment of the port, discussing the situation, each seated a meter away from the other.

"We used to meet at the coffee shop after a day's work to talk and play cards. Now there's no work, and we steal these few moments to talk and commiserate sitting away from each other before we go home to lock ourselves up," he said.

The virus has also upended plans for weddings — often extravagant affairs in the region, with hundreds of invitees.

In Beirut, Bassam Makki, the 42-year-old owner of a jewelry shop had been in the final stages of planning his wedding when the pandemic started. He and his fiance took out a loan and planned a celebration for 130 people at a four-star hotel in Beirut. The party, which had been scheduled for April 10, has been canceled.

"I guess it wasn't meant to be," he said, trying to offer a smile.