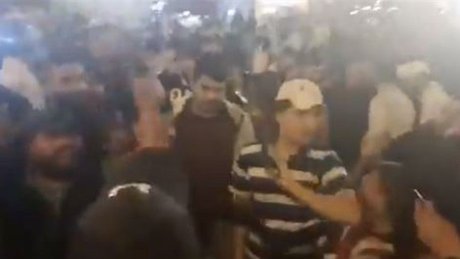 The Lebanese Army dispersed a group of protesters -defying the government’s lockdown over coronavirus- in the northern city of Tripoli who had taken to the streets late on Thursday in protest at the deteriorating living conditions in the country.

A group of angry demonstrators gathered in al-Nour Square in the south of the city -that has been the center of the largest demonstrations in Lebanon since the October 17 uprising- chanting slogans and denouncing poor living conditions.

Activists took to Twitter posting images of Thursday’s protests, and reviving the city’s “bride of the uprising” images when the October protests first erupted.

Tripoli has been a hotspot of the anti-government protests and become known as "the bride of the revolution" for its festive night-time rallies.

Lebanon, already hit by economic collapse and anti-government protests, is now grappling with an outbreak of the deadly COVID-19 virus -- its latest in a long list of crises.

More than half of Tripoli's population live at or below the poverty line, the United Nations says, and more than a quarter live in extreme poverty.