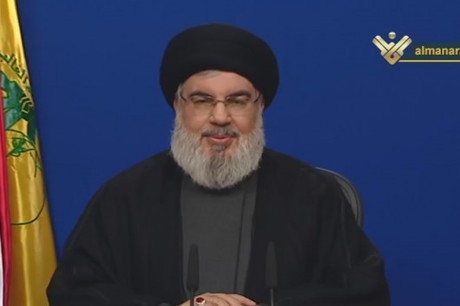 Hizbullah chief Sayyed Hassan Nasrallah on Tuesday rejected a US request to empower a UN peacekeeping force patrolling the border with Israel.

Nasrallah spoke ahead of a UN Security Council vote this summer to renew the mandate of the UN Interim Force in Lebanon (UNIFIL).

"The Americans, as the result of Israeli demands, are raising the issue of changing the nature of UNIFIL's mission," Nasrallah said in a radio interview to mark 20 years since Israel withdrew from Lebanon.

"Lebanon has refused to change UNIFIL's mission, but Israel wants... it to have the right to raid and search private properties, and the Americans are pressuring Lebanon on this matter," Nasrallah said.

In August last year, the UN Security Council voted to renew UNIFIL's mandate for a year.

But the resolution included a requirement -- on the insistence of the United States, diplomats said -- for the UN secretary general to perform an evaluation on the UNIFIL mission and its staff before June 1, 2020.

"We are not against UNIFIL staying," Nasrallah said.

But "the time of deeming Lebanon to be weak is over, and Israel cannot impose conditions on Lebanon, even behind an American mask."

In early May, the US ambassador to the UN, Kelly Craft, claimed UNIFIL was being "prevented from fulfilling its mandate" and Hizbullah had "been able to arm itself and expand operations, putting the Lebanese people at risk".

The Security Council "must either pursue serious change to empower UNIFIL or realign its staffing and resources with tasks it can actually accomplish," she wrote on Twitter.

Nasrallah spoke after a dispute broke out late Monday in the southern village of Blida between Finnish peacekeepers and residents, after a UNIFIL military vehicle hit two cars and motorbike, the National News Agency reported.

Young men cut off the road in protest, and the Finnish peacekeepers had to be escorted out by the Lebanese army, it said.

On Tuesday, surrounding villages in a joint statement accused the patrol of "entering and searching people's vineyards and private properties", describing such actions as unacceptable.

Lebanon and Israel are still technically at war.

Set up in 1978, UNIFIL was beefed up after a months-long war in 2006 and tasked with guaranteeing a ceasefire and Israeli withdrawal from a demilitarised zone on the border.

UNIFIL can have up to 10,000 troops on the ground, monitoring the truce and helping Lebanese troops secure the borders.

The stale arguments regarding the UN are the same exact ones they used to give as excuses for why they refused to let the Lebanese Army deploy in south Lebanon pre 2006.
From Aoun's interview on ‎‏09/04/02 with MTV‏‎'s Journalist Elie ‎Nakouzi and the exiled deserter's stance on claims of "liberation". That was only three years before he sold his country and his soul for promises of the presidency:
"In Lebanon there was a UN Resolution ‎‏452‏‎, meanwhile Hezbollah has prolonged the time of occupation for South Lebanon. There was a proposal ‎from Israel in ‎‏1994‏‎. Would the Lebanese government tell us why at that time it withdrew from ‎the negotiations when the Israeli proposal for withdrawal from South Lebanon was ‎submitted".‎

Nassri you are an Enemy of state!!!
Yes
nASSri = Zion ! Under the table your are friends to one another.

Same I remember that