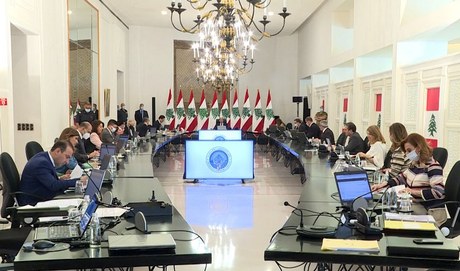 The Cabinet on Thursday extended the so-called state of general mobilization over coronavirus to July 5, as President Michel Aoun and Prime Minister Hassan Diab hit back at what they called political “campaigns” against the government.

The Cabinet decided to extend mobilization following a recommendation from the Higher Defense Council which had convened earlier in the day.

Separately, Aoun told Cabinet that there are “campaigns” targeting the government and the presidential tenure in connection with the current economic and financial crisis. “But everyone knows that neither I nor you are behind this crisis,” the president added.

“This is a very regrettable issue and we cannot remain silent about it or continue to bear the accusations that are being launched against it. Yesterday I clarified my stance in a statement and asked when my approach has been unconstitutional. I'm practicing my powers to the fullest and I know everyone's jurisdiction, especially that of the Council of Ministers,” Aoun added, in reaction to accusations launched Tuesday by al-Mustaqbal parliamentary bloc.

The president also asked the ministers to “show solidarity and respond in an objective manner that reflects high professionalism.”

Diab for his part decried the “political attacks” on the government and reassured that citizens will soon be able to sense decreases in the prices of foodstuffs and “a gradual return of the economic cycle.”

Expressing his support for “the right to protest” and his “appreciation of people's scream,” the premier voiced concern that “there could be attempts to politically exploit this scream.”

“People's demands and concerns might be transformed again and turned into a tool to block roads anew, sever the country's arteries, shut down institutions and impede people's businesses, which would consequently result in the laying off of employees and workers,” Diab warned.

He also called for “practicing the democratic right calmly and without rioting while taking health measures against the coronavirus pandemic which is still spreading until today.”

instead if slamming attacks on government, why don't Diab and company actually DO SOMETHING. They came up with a 'plan' and have yet to implement ANYTHING on it and corruption has probably increased with their 'arrangement' for the cellular carriers. Borders are still not secure, stuff comes into the ports without paying customs, and the SAME PEOPLE are still in charge.

5th of July!! Are they nuts?
Italy opened up! ITALY!!!
This country is dying!! It is in desperate need for tourists!
Put restrictions and sanitary controle measures, but let people in for God sakes!
Another pathetic excuse to contain the sawra!!