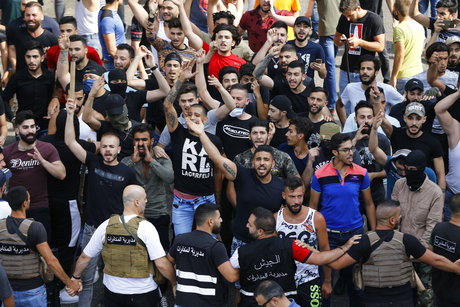 The Army Command on Sunday described Saturday's unrest as a "dangerous ordeal" and vowed that it will not be lenient with any security violator.

In a statement, the Command said that 25 soldiers were injured Saturday by flying rocks and large firecrackers, among them one with a serious eye injury.

Army units also arrested "a Syrian, a Palestinian and two Sudanese for carrying out acts of rioting and vandalization during yesterday's protests," the Command added.

Commenting on the sectarian unrest in central Beirut, Shiyyah-Ain el-Rummaneh and Corniche al-Mazraa, the military said the country has crossed a "dangerous ordeal."

"What happened was about to destroy national unity, tear apart civil peace and fuel divisions," it warned.

"The Command warns against being dragged into strife and stresses the need to behave with responsibility, awareness and wisdom to preserve civil peace and protect national unity," it added.

couldn't this all be orchestrated to instill fear so that people don't dare go and protest anymore?
yesterday's protests had nothing to do with the 17th october movement it was clearly organized by political parties. They are so desperate and afraid to be overthrown by the People that they could invent anything to stay in power...

look at the picture Who is the army members facing ? The black shirts boys and those members are the Israeli and Americans steering trouble?

Dudes.. the bald guy in the black t-shirt.. standing front left.. next to the maroon.. in the maroon t-shirt... What happens when you write a sign.. with a fantastically cleaver slogan.. and silly you.. you drop it on the way.. to peacefully demonstrate.. so you end up like a fool.. standing there holding up a stick... "Humm.. why is my sign so light all of a sudden.."...