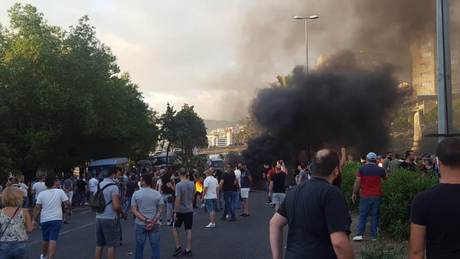 Demonstrators on Thursday blocked the vital Jounieh-Beirut highway with burning tires in protest at the arrest of the activist Michel Chamoun.

An Internal Security Forces officer had earlier been injured in the head by a flying stone as scuffles erupted outside Jounieh's serail during the transfer of Chamoun to another detention center.

The army later tried to reopen the highway several times as protesters stood their ground, which eventually resulted in fresh scuffles.

Chamoun was reportedly arrested over a social media post.

guillotine is what is needed for our corrupt politicians...