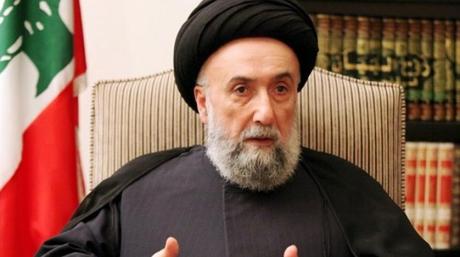 The public prosecutor’s office in Mount Lebanon on Tuesday filed a lawsuit against anti-Hizbullah Shiite cleric Sayyed Ali al-Amin for “meeting Israeli officials in Bahrain” and a host of other charges, the National News Agency said.

The prosecution’s move is based on a lawsuit filed by the lawyer Ghassan al-Mawla on behalf of Nabih Awada, Khalil Nasrallah, Shawqi Awada and Hussein al-Dirani.

The initial lawsuit accuses al-Amin of “meeting Israeli officials in Bahrain, attacking the resistance and its martyrs on permanent basis, inciting strife between sects, sowing discord and sedition, and violating the Sharia laws of the Jaafari sect.”

Yesterday it was Kinda al-Khatib, and today its Sayyed Ali al-Amin. The Hezbollah has finally found the recipe for getting rid of troublesome opponents, and speed up on the highway to Jerusalem (or was it hell?)

We are witnessing what it is like to live under a police state run by fascistic Militant party. As a shiite I stand with Syed Ali Al-Amin. This is now beyond a joke. They have nothing else but to accuse anyone who disagrees with them as a collaborator, whole it's them who are the biggest collaborators with the enemy Iran

God bless you, rabiosa. If we could stand together like this, as brethren, a lot of good things could happen in this country.

Why isn't Aoun being indicted? There are pictures of him shaking hands with an Israeli officer.

With all those charges against him, he must be a very dangerous guy.