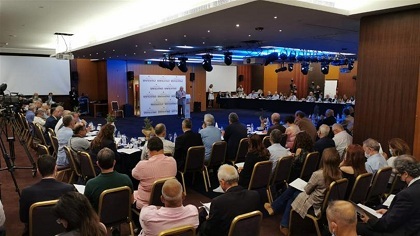 Under the title The Revolution is Ongoing, a number of the October 17 uprising activists and prominent figures in Lebanon launched the National Civil Front aimed at finding “scientific means to help solve Lebanon’s crises and assure that the uprising is ongoing,” media reports said.

A number of activists, opinion leaders, academics, judges, former ambassadors and retired officers of the October 17 uprising, met on Wednesday and launched the National Civil Front as a "comprehensive national framework to coordinate efforts in order to achieve the revolution's demand."

A founding document was drawn up and stressed a number of constants.

It called for forming an independent government with exceptional powers to carry out the following tasks:

-Implement the required structural reforms for the economic rescue program.

-Adhering to Lebanese sovereignty, consolidating the path of the civil state, and building a productive and sustainable national economy in the service of citizens.

The participants held a closed-door meeting and discussed the follow-up mechanisms.

The Front will work to devote the demands of the revolution stemming from the spirit of the people’s calls on October 17, 2019.

It also puts at the top of its priorities the measures needed that devote the independence of the judiciary and the establishment of a system of comprehensive social protection.

This is not serious. Yugoslavia was much more educated and secular than Lebanon and it broke down to its natural state.
Of course a non-secular country with a robust rule of law would be ideal but that is beyond utopia.
Federalism and confederalism will not work either. The only way is to divide the country and hyperinflation will be either the surgeon or the butcher that will do it.