Netanyahu Warns Hizbullah that Israel is 'Ready for Any Scenario' 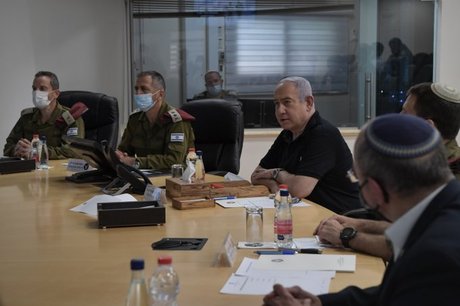 Israeli Prime Minister Benjamin Netanyahu on Tuesday warned Hizbullah that Israel is “ready for any scenario,” a day after the Israeli army claimed repelling an infiltration attempt and bombed border areas in south Lebanon.

"Everything happening now is the result of the effort by Iran and its Lebanese proxies to entrench militarily in our region," Netanyahu said during a visit to the Israeli army's northern command headquarters.

"We will continue to take action to thwart Iran's military entrenchment in our region," he added.

"We will do whatever is necessary to defend ourselves and I suggest that Hizbullah consider this simple fact. Israel is ready for any scenario," the Israeli PM warned.

Hizbullah has denied involvement in Monday’s flare-up on the border while noting that its retaliation to the killing of one of its fighters in an Israeli airstrike in Syria "will certainly come.” It also warned that it will not remain silent over the Israeli shelling that targeted a civilian house in the Lebanese town of al-Hibbariyeh.

I am pretty sure that this house-owner in al-Hibbariyeh would rather have peace and quiet instaed of Hezbollah barking about revenge for damages to his house. The village is sunni, anyway, as is Chebaa. So not much support there for Nassy, except when Al Manar stick their microphones up to their mouths asking for comments. Its like the mafia asking if ure happy to be screwed by them.

You know when I read your comments I wish the Nazi had won the WW2 and after finishing up with the Jews they would have started by Christians and Muslims eradication!