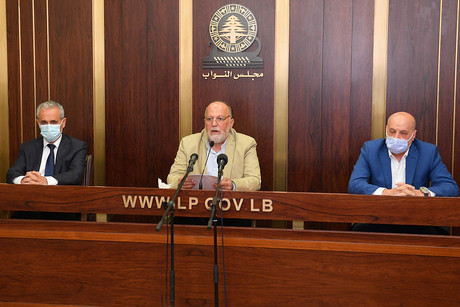 MPs Ali Ammar and Amin Cherri of Hizbullah’s Loyalty to Resistance bloc and MP Mohammed Khawaja of AMAL Movement’s Development and Liberation bloc on Wednesday announced that the two blocs support the continuation of the controversial Bisri Dam project, describing attempts to block the plan as a “water siege.”

“The dam was constructed according to scientific studies whose feasibility is clear,” Ammar said at a joint press conference in parliament, responding to arguments that “the dam is not successful scientifically.”

“We raise the voice high towards this targeting of a large segment of the Lebanese that they want to suffer thirst. All allegations and fabrications are being rallied all the way to the claim that the World Bank is colluding,” Ammar added.

Warning that citizens’ water security is facing an “internal attack,” the MP warned that the two blocs “will not allow the thirst of our people.”

“We categorically reject this new water siege on our people and we will not tolerate it no matter what it takes,” Ammar went on to say.

Later on Wednesday, al-Mustaqbal Movement leader ex-PM Saad Hariri also voiced support for the controversial project, saying it would provide much-needed water supply to Beirut and noting that there is no alternative.

The Democratic Gathering parliamentary bloc of the Progressive Socialist Party meanwhile reiterated its rejection of the project, explaining that is has reversed its initial support for it in light of reports and studies highlighting its "huge harm and risks" in addition to its "uselessness."

wouldn't have expected anything less. Heritage sites and environment mean nothing to the clowns in government.

If they are for it, then it confirms that I would be against it. They probably secured their own people for contracts.