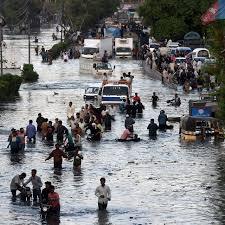 Coastal flooding and storm surges could threaten assets worth up to 20 percent of global wealth, according to research published Thursday highlighting the potential economic catastrophe that climate change may bring.

While much is known about the potential for global sea levels to rise as burning fossil fuels heats the planet and melts its  frozen spaces, far less research looks at the impact of individual extreme flood events.

They then used the data to model maximum sea levels that may occur by 2100, and calculated the population and assets at risk from such flooding.

The team found that under a high-emissions scenario, in which humanity fails to curb its carbon pollution, up to 287 million people would be at risk from extreme floods by the end of the century.

Given the large number of megacities and financial capitals on the coastline globally, they calculated the value of assets under threat to be more than $14 trillion -- around a fifth of global GDP.

"What is (currently) seen as a once in a hundred year extreme sea level, could occur once in a decade or less at most of the coastal locations," said Ebru Kirezci, from the University of Melbourne's Department of Infrastructure Engineering and lead study author.

Kirezci said this was significant because most urban planning today is conducted on the basis that such events will continue to be extremely rare.

"The new design directives might also consider updating the values with careful and detailed local modelling," she told AFP.

The Intergovernmental Panel on Climate Change says that sea levels could rise as much as one metre by 2100 if emissions are not capped.

The study, published in Nature Scientific Reports, found that areas at increased risk of extreme flooding include southeastern China, Australia, Bangladesh, West Bengal and Gujarat in India, the U.S. states of North Carolina, Virginia and Maryland and northwest Europe including Britain, France and Germany.

Kirezci said it was vital for governments to prepare defenses -- including erecting "protection structures" such as dykes and sea walls -- in order to avert almost unthinkable economic loss.