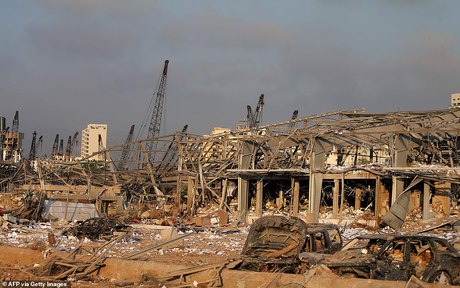 Military experts said Beirut’s catastrophic blasts explain why the United States, UNIFIL and United Nations have repeatedly called for monitoring and guarding the Lebanese coast, and also explain why “Hizbullah was shipping its arms by sea and not by land,” al-Joumhouria daily reported.

The military experts, who spoke on condition of anonymity because they were not authorized to make comments to the media, said the “blast was the result of an airstrike.”

Witnesses described the path of a plane over Beirut they allegedly said had bombed the site of the explosion.

The experts confirmed that the explosion “was not a powder explosion, but rather a red blast with crackling sparkles that come from explosives.”

They said such blasts “come from missile heads or explosive materials placed in missile heads,” and that they were “launched from sea so that Syria does not know about them.”

Chemical expert Elie Haddad, told the daily the smoke of the explosion “resembles smoke from nitric acid that originates from military explosives. This proves the material was military substances.”