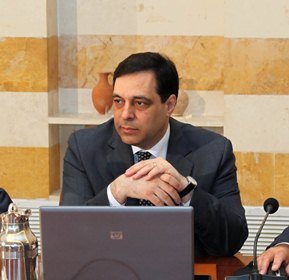 Lebanon's prime minister Hassan Diab, who resigned Monday, six days after the massive Beirut blast, owed his appointment late last year to public anger with the ruling elite, but in the end fell victim to it.

Heading what was billed as a government of "technocrats" -- experts supposedly above Lebanon's complex and murky political fray -- he was tasked with rescuing the country from its worst economic crisis since the 1975-1990 civil war.

Promising a new style of governance, the American University of Beirut (AUB) engineering professor and former education minister described himself as "one of the rare technocrat ministers since Lebanon's independence" in the 1940s.

But anger quickly grew as the coronavirus pandemic only worsened the country's economic collapse and Diab's government, having defaulted on Lebanon's debt, also failed in its negotiations for an IMF bailout.

Then came Lebanon's worst peacetime disaster, the blast sparked by a pile of ammonium nitrate that had languished in a harborside warehouse for years, which only confirmed the dismal view many Lebanese hold of their leaders, including Diab.

On Monday, after days of angry street protests, the 61-year-old premier caved in to angry calls for his government's resignation, after several ministers had already bolted his cabinet.

"Today we are heeding the people and their demands to hold accountable those responsible for a disaster," he said in a televised address.

"This is why today I announce the resignation of the government."

Diab, a father of three, obtained a doctorate in computer engineering from Britain's University of Bath in 1985. He joined AUB as an assistant professor at age 26 and rose to vice president of the prestigious university.

He served as education minister from 2011 to 2014, a brief experience in politics in a government dominated by Hizbullah and its allies.

An advocate for education reform, Diab once declared that "the solution to most of the economic, social and financial challenges, as well as those linked to unemployment, lies in education in all its forms."

Diab initially praised the protest movement as "historic", writing on social networks that the Lebanese people had "united to defend their rights to a free and dignified life."

After weeks of negotiations he took the premier's post, reserved for a Sunni in Lebanon's power-sharing system, with the support of Shiite movements Hizbullah and AMAL as well as the Free Patriotic Movement of President Michel Aoun, a Christian party.

The main Sunni bloc and its Christian allies never gave Diab their backing, complicating the task ahead for a leader who is not a member of any political party or supporter of any particular group.

Since then the professor with the carefully combed black hairdo has faced cascading crises as well as growing criticism from the now resurgent popular protest movement.

Many Lebanese derided his bombastic speeches, in which he regularly claimed to be the victim of plots, just as they had laughed at a book he had published as education minister in which he had touted his achievements.

By the admission of his supporters, his "obstinate" character did not help him gain popularity with the protest movement.

After his appointment as premier, a conflict flared between him and the AUB's management. He took legal action against the university to claim financial compensation to be paid in dollars abroad.

The move was decried as tone-deaf at a time when Lebanese citizens were denied access to their foreign currency accounts due to the economic crisis.

Over the months, he drew increasing fire from the protest movement he had once hailed as "historic and awe-inspiring."

In recent days, the Lebanese people took to the streets again and judged that Diab's government, like those before it, has failed them.