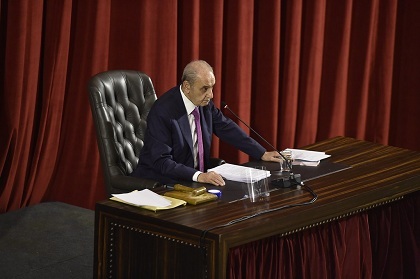 Lebanon's parliament on Thursday approved a two-week state of emergency imposed by the government after last week's deadly port explosion that gives it legal authority to suppress resurgent protests.

Calls had circulated on social media networks for protesters to prevent lawmakers from entering the session -- the first since the August 4 blast that ravaged swathes of the capital.

But turnout was too low on Thursday morning, ahead of official visits by French Defenze Minister Florence Parly and David Hale, the top career diplomat at the U.S. State Department.

Security forces outnumbered the dozen or so demonstrators who had gathered on a street near parliament's temporary venue, an AFP correspondent reported.

Demonstrators tried to heckle tinted vehicles dashing to the debate but they could not stop it reaching a quorum.

The colossal explosion that killed 171 people and wounded at least 6,500 others has rekindled calls for the ouster of Lebanon's decades-old political elite, many of whom are former warlords from the 1975-1990 civil war.

There has been widespread anger against a political leadership which allowed a large shipment of hazardous ammonium nitrate fertiliser to rot for years in a port warehouse despite repeated safety warnings.

An AFP investigation found that up until the day before the deadly blast, officials had exchanged warnings over the cargo, but did nothing despite experts' fears it could cause a major conflagration.

As he presented his government's resignation on Monday, Prime Minister Hassan Diab blamed the blast on decades of corruption and official mismanagement.

Even President Michel Aoun, a symbol of the status quo, has acknowledged the need to "reconsider" the country's governance after the disaster.

Parliament on Thursday approved the resignation of seven lawmakers who had stepped down since last week over the blast.

Attempts by officials to distance themselves from the political elite failed to convince many ordinary Lebanese, who saw nothing more then an exercise in buck-passing.

"We are taking to the streets to stop the criminals from meeting," said one post on social media networks, calling for rallies on Thursday.

"You have destroyed us! Leave!" said another.

The government had already declared a two-week state of emergency the day after the explosion.

But as the measure lasts more than eight days, Lebanese law requires that it be approved by parliament, according to The Legal Agenda, an NGO.

The state of emergency allows the army to close down assembly points and prohibit gatherings deemed threats to national security, and expands the jurisdiction of military courts over civilians.

The army can also raid homes at any time and impose house arrest on anyone engaged in activities considered to threaten security, human rights groups said.

"Human Rights Watch is very concerned that the state of emergency would be used as a pretext to crack down on protests and snuff out the very legitimate grievances of a large segment of the Lebanese population," its Lebanon researcher Aya Majzoub said.

Expanded jurisdiction of military courts is especially worrying as "military courts in Lebanon do not respect due process rights and violate international law," she told AFP.

"There is incredible chaos," Saghieh said. He said the state of emergency's only justification is to extend the power of the state and security agencies and "control the opposition."

"We were waiting for the army to help in reconstruction not be an extension of power," he said.

Lawmaker Simon Abi Ramieh protested that Parliament was convened to vote on the state of emergency while it was still in effect and called instead for forming a parliamentary committee to investigate the blast.

"We are living in a state of institutional blunder," he said. "We are in a place and the Lebanese people are somewhere else. ... The public wants to know the truth behind the negligence that led to the explosion."

Protests have rocked central Beirut on successive nights, leading to scuffles with security forces who have fired tear gas and rubber bullets to disperse the crowds.

The anger on the streets has reinvigorated a 10-month-old protest movement that had largely fizzled out in the face of the coronavirus pandemic and a worsening economic crisis.

The explosion has also renewed calls by Lebanon's international partners for overdue reforms to shore up the deeply indebted economy.

Hale, who is to arrive in Lebanon for a three-day visit, will "stress the urgent need to embrace fundamental economic, financial and governance reform", a statement said.

"He will underscore America’s willingness to support any government that reflects the will of the people and is genuinely committed to and acting upon such a reform agenda," the statement added.

When will Naharnet catch up with the facts of what actually happened, and as leaked by President Trump & confirmed by the Pentagon?

Yeah, Explain that Mark. Explain the facts according to Trump. After all, Trump is always about facts! Mark, Get your own facts straight first.

These people have to understand that their shelf life has expired, they became obsolete, it is time to be written of and be replaced.