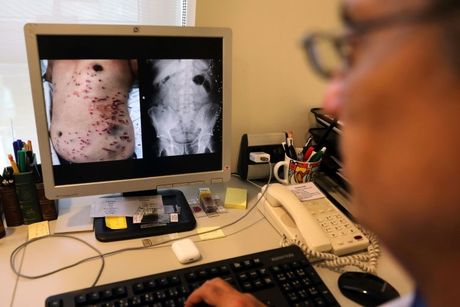 Firas and Zeina survived Beirut's port explosion unscathed but still sustained severe injuries -- not in the disaster itself but in the heavy-handed crackdown on the street protests that followed.

Firas Hamdan, 33, a lawyer who was filming one demonstration, was hit in the heart by a lead pellet that surgeons have been unable to remove in an operation that has left a long scar down his chest.

Zeina, a 50-year-old mother-of-three, was also hit by such pellets that security forces were accused of firing from pump-action shotguns during the unrest, leaving her back pockmarked by the impact wounds.

"Some people lost their sight and others were hit with pellets, like I was in my heart," said Hamdan. "This made us realise that we are not living in a normal country."

In the chaotic days after the August 4 explosion, thousands of angry protesters rallied in Beirut against the official incompetence and corruption they blame for Lebanon's worst peacetime disaster.

The public fury over the blast -- caused by a stockpile of ammonium nitrate that had languished in a warehouse for years, officials say -- reinvigorated a protest movement that had kicked off last year but since faded.

The protest sparked a heavy response in which security forces and plain-clothes personnel fired tear gas canisters, rubber bullets and shotgun pellets into the crowd, according to protesters and human rights groups.

The violent crackdown sent hundreds of bloodied demonstrators flooding into Beirut hospitals that were already overwhelmed by thousands of blast casualties and surging novel coronavirus cases.

Doctors reported that multiple protesters lost an eye and told AFP the injuries from the latest demonstrations were the most severe they have seen since the start of the nationwide protest movement in October.

Hamdan, who for months has documented abuses against protesters, was broadcasting live on Facebook during an August 8 rally when the pellet hit him.

He was rushed to hospital unconscious and taken into open-heart surgery, but the doctors could not extract the pellet.

"The doctor told me that removing it would kill me," Hamdan said, speaking in his living room several days after his release from hospital.

Pump action pellets were also fired "from an unidentified source," leading to severe injuries, according to Amnesty, which said some 230 people were wounded on August 8 alone.

The protest injuries piled more trauma on a country already brought to its knees by the colossal port explosion that killed 181 people, wounded thousands more and laid waste to swathes of Beirut.

"There was a punitive shoot-to-harm use of force," Amnesty said.

Zeina, who asked to use a pseudonym, said she considered the use of force against her a "murder attempt".

She recounted how she was dodging tear gas during a protest near the parliament when she felt a sharp pain radiate across her back as lead pellets embedded themselves in her skin.

"I took two steps forward and then also felt pain down my arm" from another spray of pellets, she said. "Then I collapsed on the ground."

A group of Lebanese doctors who have dubbed themselves "The White Coats" reported at least 60 severe injuries caused by rubber bullets and pellets fired directly into the crowd at chest level and close range.

Doctor Selim Nasser, a member of the group, told AFP he was especially concerned about the pellets, which he had not seen security forces use before.

"They lead to severe injuries because they pierce and rupture the skin," he said, warning also of longer-term consequences, such as lead poisoning.

Twenty of those hit by rubber bullets and pellets suffered eye injuries, according to the White Coats group.

Eight among them required surgery and at least three have lost sight in one eye, said ophthalmologist Nada Jabbour.

Lawyers and rights groups have called for an investigation, and Amnesty judged that "the state seems to be on the attack against its population".

Security forces and the Lebanese army have denied firing rubber bullets and other munitions at protesters, despite growing evidence.

Some have pointed at the parliamentary police, a unit that enjoys broad autonomy and had been repeatedly accused of using violent methods to suppress protests.

Imad Ammar, a lawyer with the Beirut Bar Association, has since October documented abuses against protesters as a member of a specialised committee.

"We are in the process of filing legal complaints to the judiciary on behalf of the injured," he told AFP, voicing hope this will help "expose the identity of attackers and hold them accountable".

The lawyer said that pellet injuries were unheard of before the latest protests, charging that "they constitute an attempt to kill or harm and they violate the right to peaceful assembly".

Back at his home, Hamdan said his near-death experience had only fuelled his anger against the authorities.

"They are trying to kill people and discipline them," he said, still hardly able to move.

"In a month or so I will be back on the streets and I will raise the same demands," he vowed. "But this time with more tenacity and conviction."