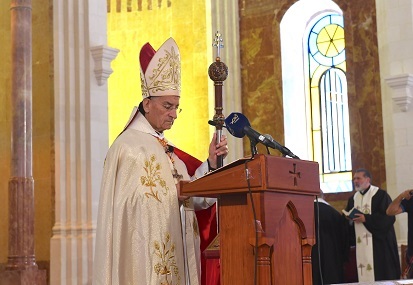 Maronite Patriarch Beshara al-Rahi on Sunday called for the removal of “all arms and explosives depots” from Lebanon’s residential areas, in the wake of the Beirut port blast that killed dozens, wounded thousands and devastated swathes of the capital.

“Let Lebanese authorities consider the Beirut port disaster an alarm bell and let them raid all arms and explosives depots and warehouses that exist illegally in the residential neighborhoods of cities, towns and villages,” al-Rahi said in his Sunday Mass sermon.

“Some Lebanese regions have turned into fields of explosives which we do not know when they will blow up or who will detonate them,” the patriarch warned.

“The presence of these depots represents a serious and dangerous threat to the lives of citizens, which do not belong to any person, group, party or organization,” al-Rahi went on to say.

He accordingly called on authorities to “removes these arms and explosives so that citizens can feel safe, at least inside their homes.”

Official negligence and corruption have been blamed for the detonation of around 2,700 tons of ammonium nitrate stored unsecured for around seven years at Beirut port. Ammonium nitrate has a dual use as fertilizer or in explosives.

Turning to the issue of the formation of a new government, al-Rahi lamented that the political parties “are approaching the formation process from an electoral and partisan angle.”

“They are raising conditions and counter-conditions,” he decried.

The patriarch also said that “the people and the world are awaiting the formation of a national and economic rescue government, quickly and without delay for any reason, on the condition that it be formed of (political and economic) rescuers.”

Why not say removal of the state witin a state Iranian terrorist militia aka kizballah? is there anything more corrupt than having a bearded rat living in the sewers taking away our freedom and threatening us on a daily basis by video all under the watch of a president/government that does not actually exist.

“Some Lebanese regions have turned into fields of explosives which we do not know when they will blow up or who will detonate them,” the patriarch warned.
Batrak, The RIGHT QUESTIONN IS: why there are so many explosives ? so many warlords? why since the independence the Lebanese do not trust each other? why foreigners can easily interfere?
First solve the root cause of these events then and only then peace and prosperity will occur.

Urge for removal of Ebola instead!

Respect.
In a country where you have to weigh every word 3 times, the message is clear enough.

Yeah Rahi, screw Palestine , screw Syria, screw Hez and screw Israel. Build a wall across all borders , send Hiz to Syria or Gaza to fight all they want, turn Lebanon into a free neutral zone free of arms. Lebanon suffered enough . first PLO where they ruin the country, then Syria where that stole , rape and assassinate, and now Hezbollah that destroyed Lebanon. everyone OUT !!!!!!

What a Shepherd! He is so in touch with his flock and knows their needs! He even has the support of the party of God himself!