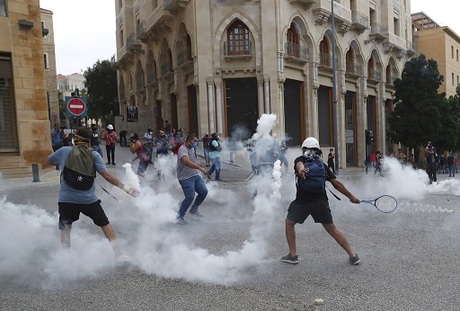 The confrontations followed a peaceful larger rally at the nearby Martyrs Square where speeches were delivered by representatives of the protest movement against a ruling class seen as being responsible for the economic collapse and port explosion.

"Time for accountability," read one banner put up by demonstrators.

More radical protesters later headed to a street near parliament and started hurling stones over a security barrier.

A social media video meanwhile showed protesters preventing an Internal Security Forces car from passing among them, with some hurling stones, kicking at it and hitting it with sticks.

Later in the evening, security forces advanced towards protesters under a heavy cloud of tear gas, pushing them away from the streets around parliament.

The Lebanese Red Cross meanwhile announced that five of its teams were tending to the wounded in the protest zone.

A blaze meanwhile erupted in an empty restaurant in the building of Annahar newspaper, which was badly damaged by the August 4 Beirut port explosion. The fire was later extinguished as protesters set trash bins in the area ablaze.

The protest comes a day after little-known diplomat Mustafa Adib was designated to form a new government.

The protest movement has slammed Adib as a product of the same political class they have been rallying against since October last year. The demo also comes on the second day of an official visit to the country by French President Emmanuel Macron.

What made the Cedar Revolution great and effective is tat it was peaceful, attracted ordinary Lebanese with their families, and had one focus which was ending the Syrian occupation. What is going on today is counterproductive, violent, and no clear slogan. It amplify the message that lebanon is a failed state. True Thawra should separate from these groups, create a 100% peaceful demonstration, demanding the end of all arms outside the army and ending corruption. Number is not as important as the unity of message, peaceful organization, and multiple demonstrations in many cities. The message will amplify and inspire if it remains civilized with no violence or causing any damage. Something similar to the human chain.