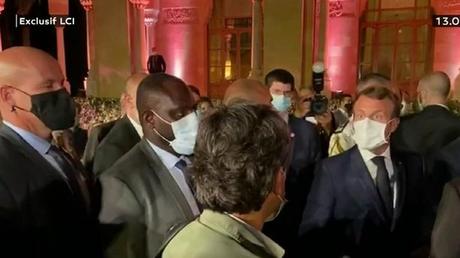 French President Emmanuel Macron on Wednesday faced accusations from opponents of trampling on press freedom after he personally berated a prominent reporter over an article the head of state described as "unprofessional and mean."

Macron sternly rebuked Le Figaro journalist Georges Malbrunot, a specialist on the Middle East, after his press conference Tuesday at the end of a two-day visit to Beirut.

Ironically for some, Macron's sharp words came minutes after he had loudly defended the importance of freedom of expression in France as the trial over the January 2015 deadly massacre at the Charlie Hebdo weekly gets underway.

"What you have done, taking into account the sensitivity of the subject, is irresponsible," Macron told Malbrunot to his face, according to images broadcast by the LCI channel.

"You have always heard me defend journalists, I always will. But I tell you frankly, what you did was grave, unprofessional and mean," he added.

But it appeared Macron was angered most by a previous article penned by Malbrunot saying the president was considering sanctions against Lebanese politicians who resist reform.

Macron had mentioned the article during the press conference, criticizing those who write "the worst nonsense... without any verification."

Malbrunot, a veteran reporter who was held hostage for several months in Iraq in 2004, told AFP: "I was very surprised by the virulence of this attack, which is unacceptable.

The presidency said Macron was angered that Malbrunot had not sought out a response beforehand to the claims in the article.

"The president reproached (Malbrunot) for not giving the Elysee the possibility of reacting to information," the Elysee said, adding it had now spoken with Malbrunot and Le Figaro and that it also considers the incident closed.

But politicians on the right expressed consternation over Macron's tirade, especially as it came a day before the opening of the trial of 14 suspects over the January 2015 massacres on targets including Charlie Hebdo.

MP for the right-wing Republicans Olivier Marleix wrote on Twitter that the "way Macron gives lessons to Georges Malbrunot... is astounding."

"How can he at the same time claim 'I am Charlie' and at the same time try to humiliate a journalist who is just doing his job," added Gilles Platret, the vice president of the Republicans.

Macron was in Beirut for a second time since a devastating August 4 explosion killed 190 people and wounded thousands, to urge political reform in the disaster-hit country.

"Just a reminder. Georges Malbrunot is a journalist. He was just doing his job to inform," wrote Le Figaro's political editor Albert Zennou.

Macron has had a prickly relationship with some journalists during his three years in power and has rarely held press conferences, preferring to communicate through social media.

His off-the-cuff reactions to situations have at times dismayed even close aides, notably in 2018 when he told a jobseeker to "cross the road" and find a job.