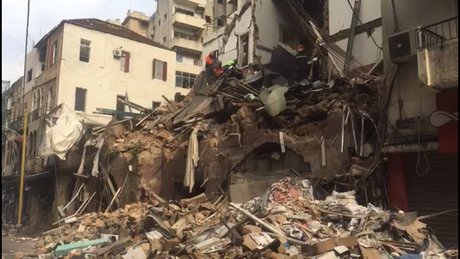 Rescue workers dug through rubble in a wrecked district of Beirut Thursday in search of possible survivors from a mega-blast at the adjacent port one month ago, after scanners detected a pulse.

A sniffer dog used by Chilean rescuers on Wednesday night responded to a scent from the site of a collapsed building in the Mar Mikhail area, the city's governor Marwan Abboud told reporters at the scene.

"There could be survivors," he said, explaining that scanners had detected a pulse, however faint the hope of finding anyone alive more than four weeks after the explosion.

"We hope someone will make it out alive," Abboud said.

Michel Murr of the Beirut fire department also said a pulse was detected about two meters (six feet) below the rubble.

"One person, according to the (thermal) camera, still has a pulse," Murr said.

The building has completely collapsed as a result of the blast that killed 191 people, wounded more than 6,500 others and destroyed swathes of Beirut.

Seven people are still missing, according to the Lebanese army.

Speaking to local broadcaster LBCI, a rescue worker said scanners had picked up a respiratory rate of "19 breaths a minute."

Lebanon on Friday marks one month since the blast that authorities say was caused by a shipment of ammonium nitrate left to languish for years at Beirut's port.

Finally, some good news in this sea of darkness. Fingers crossed the person gets out alive.

did they get to them?