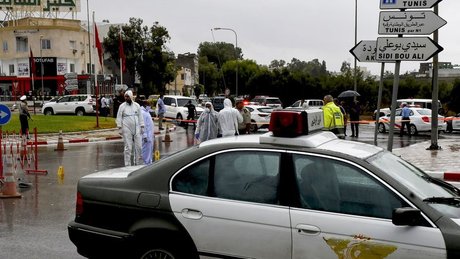 Tunisian authorities said Monday they had arrested seven people over a knife attack the previous day that killed a National Guard officer and wounded another.

The attackers struck early Sunday morning in the tourist district of Sousse, ramming the officers with a vehicle and then assailing them with knives.

Three assailants were later shot dead in a firefight, the National Guard said, labelling the attack a "terrorist" act.

They included "the wife of one of the assailants, who described her husband as a 'martyr' during the interrogation," he said.

Two brothers of one of the attackers and a person suspected of recruiting them were also arrested, he added.

He said the attackers were a pair of twins and a third man from the marginalised northwestern region of Siliana, he said, without confirming or denying reports of a fourth attacker.

Jebabli said the twins had visited Facebook pages dealing with "explosive and armed attacks" but had stayed under the radar of the authorities.

Tunisia, since its 2011 revolution, has been hit by a string of jihadist attacks that have killed dozens of security personnel, civilians and foreign tourists.

Sunday's attack took place close to the site of the deadliest attack, when 38 people, most of them Britons, were killed in a 2015 beachside shooting rampage.