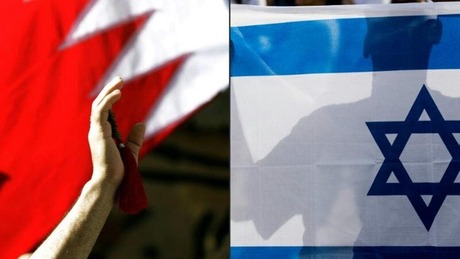 Bahrainis opposed to their government's agreement to establish diplomatic relations with Israel vented their frustration on social media Saturday, underlining the complexities of the Gulf's rapprochement with the Jewish state.

The hashtags "Bahrainis against normalisation" and "normalisation is betrayal" were trending on Twitter after US President Donald Trump announced the deal late Friday.

Bahrain, a Sunni-ruled kingdom with a large Shiite population, shares with Israel a deep enmity towards Iran, and relies on the United States, which stations its Fifth Fleet on the tiny but srategic archipelago.

It has become the second Arab country in a month to normalise ties with Israel after the United Arab Emirates struck an accord that promises major gains on the security, trade and tourism fronts.

Bahrain's Foreign Minister Abdullatif bin Rashid Al-Zayani said the deal represented a historic step towards achieving peace in the Middle East, but the Palestinian Authority and Islamist movement Hamas both condemned it as "another stab in the back" by an Arab government.

Unlike the UAE, opposition to normalisation runs deep in Bahrain, which has a history of open politics even if it has been suppressed over the past decade.

Former MP Ali Alaswad wrote that it was "a black day in the history of Bahrain."

The kingdom -- a small archipelago located between regional rivals Saudi Arabia and Iran -- has been hit by waves of unrest since 2011, when security forces crushed Shiite-led protests demanding reforms.

Hundreds of citizens have since been jailed and some stripped of their citizenship over what the government says is "terrorism" linked to Shiite Iran. Protests are extremely rare and are met with harsh action by security forces.

Authorities dissolved the two main opposition groups, Shiite group Al-Wefaq which was the largest in parliament until 2011, and the secular National Democratic Action Society, or Al-Waad, over allegations of links to "terrorists."

Both are denied representation in parliament, and Al-Wefaq leader Sheikh Ali Salman has been behind bars since 2014.

"The agreement between the despotic regime in Bahrain and the Zionist occupation government is a total betrayal of Islam and Arabism and a departure from the Islamic, Arab and national consensus", it said on Twitter.

Hussain Aldaihi, deputy secretary general of Al-Wefaq, wrote that "normalisation confirms what is certain, that these regimes pose a threat to their countries, peoples and the nation, by implementing disruptive agendas against the interests of our Arab and Islamic countries & peoples."

Other anti-normalisation groups, based both inside Bahrain and abroad, expressed their anger in statements sent to media, calling the deal "shameful."

Let us clear up a big mistake in the AFP report. Israel does not have a deep enmity with Iran. It has an enmity with the Iranian leadership.
As far as the opposition in Bahrain is concerned, in every single country, there are always violent minority groups who protest and demonstrate against everything and anything the government decides.

You are delusional phillipo. Bahrain is an absolute monarchy where dissent is not tolerated. The public has not been consulted about this agreement and it is almost certain that it would have been rejected by the overwhelming majority of the population. The violent minority are the regimes you love that practice violence against their people to suppress any dissent. These are the only people you can make "peace" with because they will sell anything to stay in power.

philippo, the zionist shill, loves arab dictators, tyrants and oppressive regimes. The opposition in Bahrain is the Bahraini population. They are not the "violent minority". Have you no shame? You settlers were the violent minority, the violent FOREIGN minority in Palestine before Britain gave you the land that neither belongs to them nor you and kicked out the majority of Palestinians living there. Modern day terrorism in the middle east started with zionist terror groups such as irgun.

I agree with phillipo. Stop living in the past. People should move on.

In short phillipo who supports a supposed 2000 years old dream for Zion is living in the present but Palestinian refugees demanding the right to returns to towns and villages they were expelled from 70 years ago are living in the past! How about Palestinians living currently under occupation?

Is this also part of the past?

Lol israel is not only built because of the past, its built on a past that modern day israelis who are russian, yemeni, ethiopian etc have no link to. Stop trolling.

"Bahrain, a Sunni-ruled kingdom with a large Shiite population"

Stop spreading this nonsense. The rulers of Bahrain are not sunni. They are dictators, they use secularism, zionism, religion and other forms of ideologies to benefit them depending on what the situation calls for.

The worlds map looked different 100 years ago and it will look different in another 100 years. Nothing lasts forever!