Bassil Says Some Insisting on Forming Govt. 'without Consultations with Anyone' 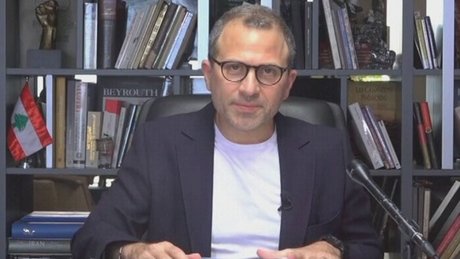 Free Patriotic Movement chief Jebran Bassil on Sunday decried that “a single camp” is seeking to form the new government “without consultations” with the other political parties, in an apparent reference to Prime Minister-designate Mustafa Adib and his backers.

“Why is there insistence on the formation of a government by a single camp, without consultations with anyone, under the slogan of expert, nonpartisan (ministers)?” Bassil said at a press conference.

“They’re saying, ‘Either the government gets formed the way we want, or else the (French) initiative would fail and the country would collapse,’” the FPM chief lamented.

“How can characteristics and names be specified by a single camp in the country although it does not have the parliamentary majority? Is this how a parliamentary system works in other countries?” Bassil asked, in an apparent jab at al-Mustaqbal Movement and ex-PMs Najib Miqati, Tammam Salam and Fouad Saniora.

Commenting on Speaker Nabih Berri’s insistence on the allocation of the finance portfolio to a Shiite figure, Bassil said “the Constitution is clear” and it does not allocate a portfolio to “a certain sect.”

“If the objective is to enshrine the third (Shiite) signature (on important decrees), this would be an attempt at tripartite power-sharing and we certainly reject it,” he added.

Bassil, however, noted that the FPM supports the principle of the rotation of ministerial portfolios “but not reliance on foreign support to impose anything on each other.”

“We are not with the exploitation of a certain situation to break one another,” he said.

Bassil also pointed out that the FPM does not have “a desire to take part in the government,” while stressing that it will “facilitate its formation.”

He also said that the FPM has an initiative that involves “discussing the issue of Lebanon’s neutrality around a dialogue table”, “speeding up the file of extracting gas and oil” and “demarcating land and maritime borders.”

The PM has the right to form the government. You can vote it up or down in Parliament. That is the way it was supposed to be.

Deranged, Ignorance, stupidity that what I see in the picture.

Hope the US puts sanctions on Randa Barry. Everyone has long suspected of Barry being a thief---in the last few days, he has demonstrated to the world. Iran is running out of money to give to them so they and kizb are trying their best to find another source they can take as their own.

Pull out the roots to clean the rotten ground .
Simply at this stage every one is climbing on walls .
Macron has all the $’s and a collaborator with the devils. Why don’t they seize it and
Bring it back to Lebanon . No one to trust so the keep it as is to benefit the French people.
Simply knives are cutting on Lebanese skins.
Here is my scenario of which is an imagination
Israel to stay and it will make Turkey take over half Lebanon and hizib Allah 1/4 of Israel.
Iran will play suntan on our beaches and a French boy will be the Lebanese proforma or president.

Michel Aoun and Gebran Bassil have single-handedly caused the most damage to Lebanon, which has much bigger problems to deal with than Covid, such as the Iranian virus and Hezbollah virus. We need a vaccine quickly.

This man said:Is this how a parliamentary system works in other countries?” Bassil asked,

Answer to this man: in civilised countries they have different standard with regards to the integrity and honesty of the members of parlement. you with your co-politicians whether allies or opposition have expired you have to understand how the civilised world think of you.

Stop whining and put your money where you mouth is.

Bassil says "some insisting on forming government without Consultations with Anyone" and everyone watching his press conference said in unison "yeah we know, we're looking at it!".

It's called transition emergency government because a massacre occurred on aug4th and the current remaining people in power have done NOTHING..is this how you run a country?

Stay out of the Americans and Europeans or else you are going to hell very soon along with every Lebanese citizen, at which point only history will write about those facts and how low you are.

‘Help, they wanna take me out!’ Said the man in the picture.

He's panicking so trying to revive the old Aounist rhetoric, he cannot fool many Christians with it any more.

You mean cannot fool many Lebanese . If we really want a better Lebanon, then we the ordinary people should stop talking in dividing the population in religion.

He just doesn't get it... not a very clever man this Bassil obviously...

Bassil brought Aoun to his demise by making him do a 180 degree turn in his policies since 2005. He convinced him to ally himself with Hezbollah and Syria in order to become president. In his interviews before 2006, Aoun called the Shebba Farms occupation a lie and a pretext for Hezbollah to remain armed; he pitied the Israelis and called on Palestinians and Hezbollah to stop their suicide attacks and recognize the humanity of the Israeli people; he never referred to Israel as an enemy, while constantly calling Syria an occupier. Check out Aoun's interviews with MTV in 2002-2003. Aoun must hate Bassil so much for turning Aoun's controversial legacy into an avowedly monumental disaster.

lol in this one he looks like ya nousso!

But I admit that each time I see his ugly face I find myself singing "Hela, Hela, Hela Hela Ho!"

This is a must watch documentary ... the FACTS about Michel Aoun.

The truth and facts about Michel Aoun.

Watch this documentary. The truth and facts about Michel Aoun.