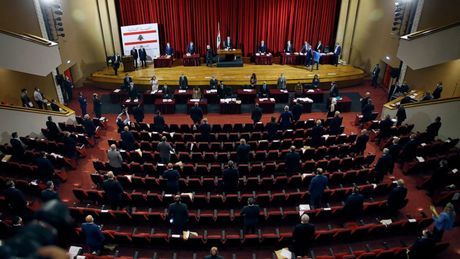 Lebanon’s parliament approved on Wednesday the illicit enrichment law and postponed discussions into a controversial general amnesty until the afternoon session.

Lawmakers convened at the UNESCO Palace, not the usual venue because of the outbreak of coronavirus.

Shortly before the meeting, Berri decided to delay until the afternoon discussions on the general amnesty draft law because the Strong Lebanon bloc threatened to boycott the meeting.

He later said the bill will be discussed during an afternoon session.

Said law was listed as urgent in light of a spike in coronavirus cases in Lebanon’s overcrowded prisons, mainly in Roumieh.

The Lebanese Forces, Strong Lebanon bloc threatened to boycott the session if the bill did not meet the bloc’s criteria. But they stepped back after Berri’s decision.

Similarly, al-Mustaqbal parliamentary bloc said it does not agree to the current text of the general amnesty draft law.

"The proposed format does not fulfill our demand and that of the relatives on ending the injustice and unfairness against a large number of detainees,” head of the bloc Bahiaa Hariri’s press office said in a statement.

“Unjust enrichment will therefore be classified as an ordinary crime, subject to ordinary judiciary. Meaning, violators will no more enjoy immunity from prosecution,” he added.