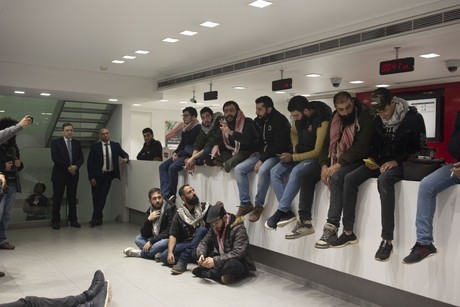 Angry protesters stormed into a bank in downtown Beirut on Wednesday to demand that their savings, which has been trapped for months, be given back to them.

The National News Agency said the protesters forced their way into the bank’s headquarters without naming it.

MTV television said another group staged a sit-in in downtown Beirut protesting against the "policies of banks."

Lebanon is suffering its worst economic crisis in decades, marked by an unprecedented plunge of its currency, which has left nearly half of the population in poverty.

The financial collapse has led to mass layoffs and salary cuts in a country already rocked since late 2019 by mass protests against a political system seen as corrupt and incompetent.

That means suddenly freaks like Berri, Basil, and his amo enrolled at the economic faculty in University of Teheran. Sorry to write this but the country seems to deserve a war, plunder seems not enough and creative creatures still find a legislative way to share its last spoils. The opium seems to be free in Lebanon.

They should burn the building with the employees inside...